Wednesday, October 2, 2013
First meeting with a blog fan!
First email:
He wrote me a sweet fan email a little less than a month ago.
===========
from: Landshark
to:      Sassy
date:   Fri, Sep 6, 2013 at 11:29 AM
subject:  Blog
I’ve been an on and off reader of your blog (depends on how the real world intrudes).
Nevermind the salacious content – which is very enjoyable – as a south of boston resident – I also enjoy the restaurant recommendations!
If you ever need company at a local establishment 🙂
Keep up the blogging!
Evan
===============
Background
So…. Local blog fan!  Wow.  Lives about 30 minutes from me.  We got to know each other through back and forth emails and some phone calls.  He indulged me in taking my time,  Skinny 6′ 165 pounds.  Runner.  Travels a lot for business.  He is married with two kids.  Raised in NYC.  Still a Yankees fan despite living in MA for 20 years.  Blerg.  Why is every man who approaches me a damn Yankees fan?!
He sent the most creative photos I’ve ever seen, “Pieces” of the puzzle.  I saw his torso in the bathroom mirror with a towel around his hips and his upper half obscured by a steamed up mirror.  I saw his shoulder.  I saw his toes in the surf.  I saw his upper chest.
About a week later he called me while he was alone in a hotel room.
I have Google Voice so I don’t have to give out my real phone number.  It asks the caller’s name the first time you call, then asks if I want to accept the call.  Usually I get a nervous… “Uh.. Chris” from a guy.  This time I hear a very confident, “LandShark.”  I was laughing so hard I couldn’t talk when he came on the line!  So I chose that for his name.  I asked him if he knew what that reference was really about… a guy who worms his way into a lady’s place and ravages her.  “Oh yes,” he answers with an evil laugh.
His phone kept cutting out, so he asked if we could switch to Skype.  I downloaded the app, signed up for an account and pinged him back in less than 3 minutes.  Whew!  He turned on the video option and showed me his belly button and his boxer briefs.  Yum.  Then we went back to voice only.  It has really good quality, must better than Google Voice.  I felt like I was lying next to him in bed.
It was very early days.. I thought we’d just chat quickly, friendly, and he’d hear my sultry voice but we ended up talking for two hours and he went over the line very quickly into very sexy talk and made me cum twice!  Whee!
We kept talking and emailing and finally he asked me out to dinner.   Told me to pick a place.
We agreed to meet halfway.  Dinner and perhaps dessert in my car… if….
We emailed back and forth as we drove.  (While I was sitting at stoplights).  I told him what I was wearing and he told me.  He got there first.  I asked him to order me an iced tea.   He said he was in a booth in the back.
=========
Dinner
7:45 pm Met at Ixtapa, the Mexican place in Lexington
He was sitting in a back booth about 2/3rds of the way back.  Orange shirt, black jeans.
I had on my sleeveless black dress with the white dots, a black & white scarf around my arms,  my lucky black bra and tiger underwear, with black clogs.
He stood up to give me a hug.  I “mmm”d in his ear.  He is skinny!
There was my iced tea!
We stared at each other for a long time.  His face is not good looking.  Not repulsive, but not handsome.  Homely.  He has a great body!  Sort of like… Vladimir Putin?  Sweet, but… dangerous. 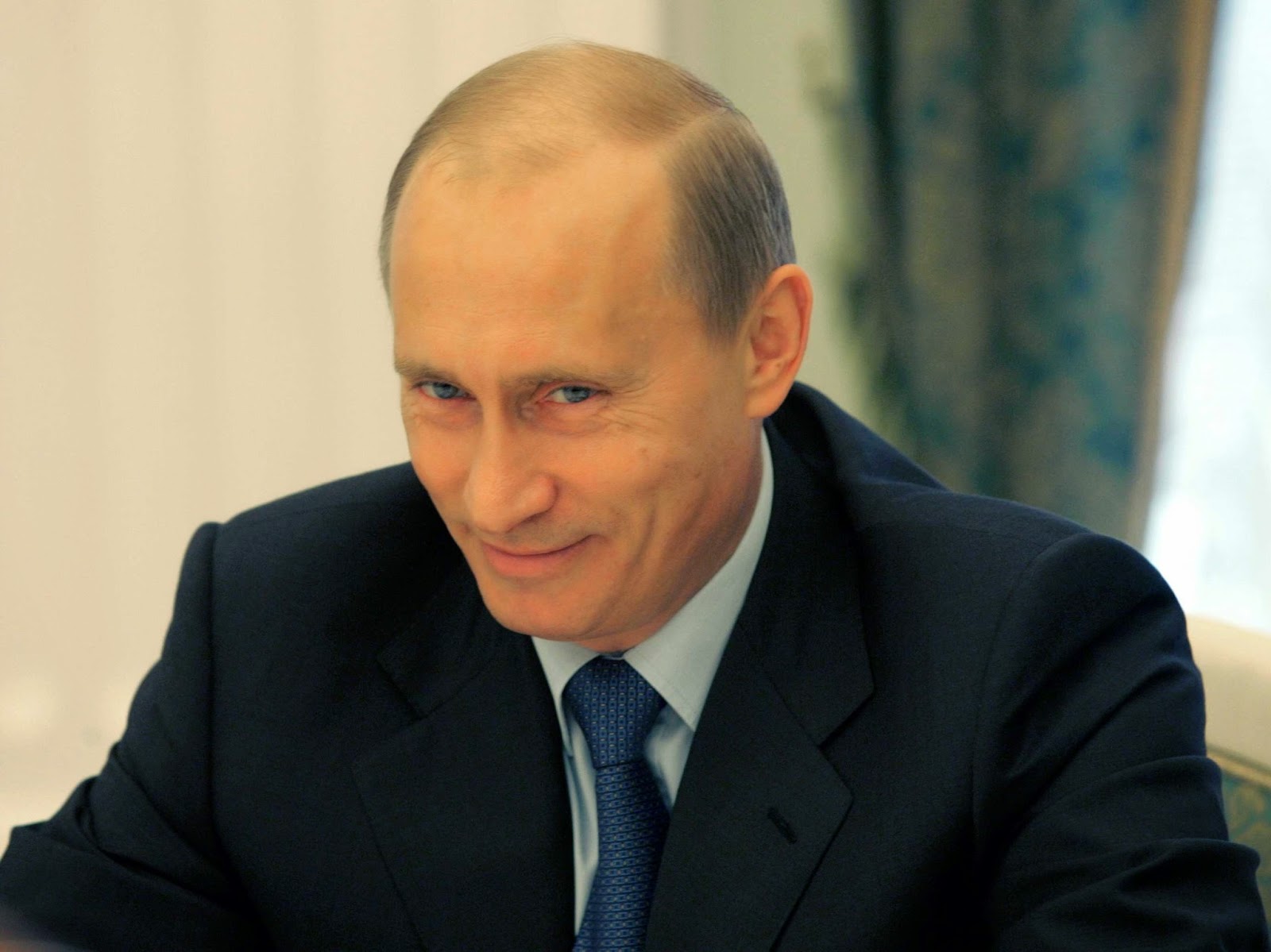 Vladimir Putin
I ordered the Enchiladas Mazatlan, a seafood flour tortilla with rice and beans.  When the plate arrived, he said, “Aren’t you going to take a photo?”  Hee!  So fun being with someone who reads the blog and doesn’t mind my silly photos. 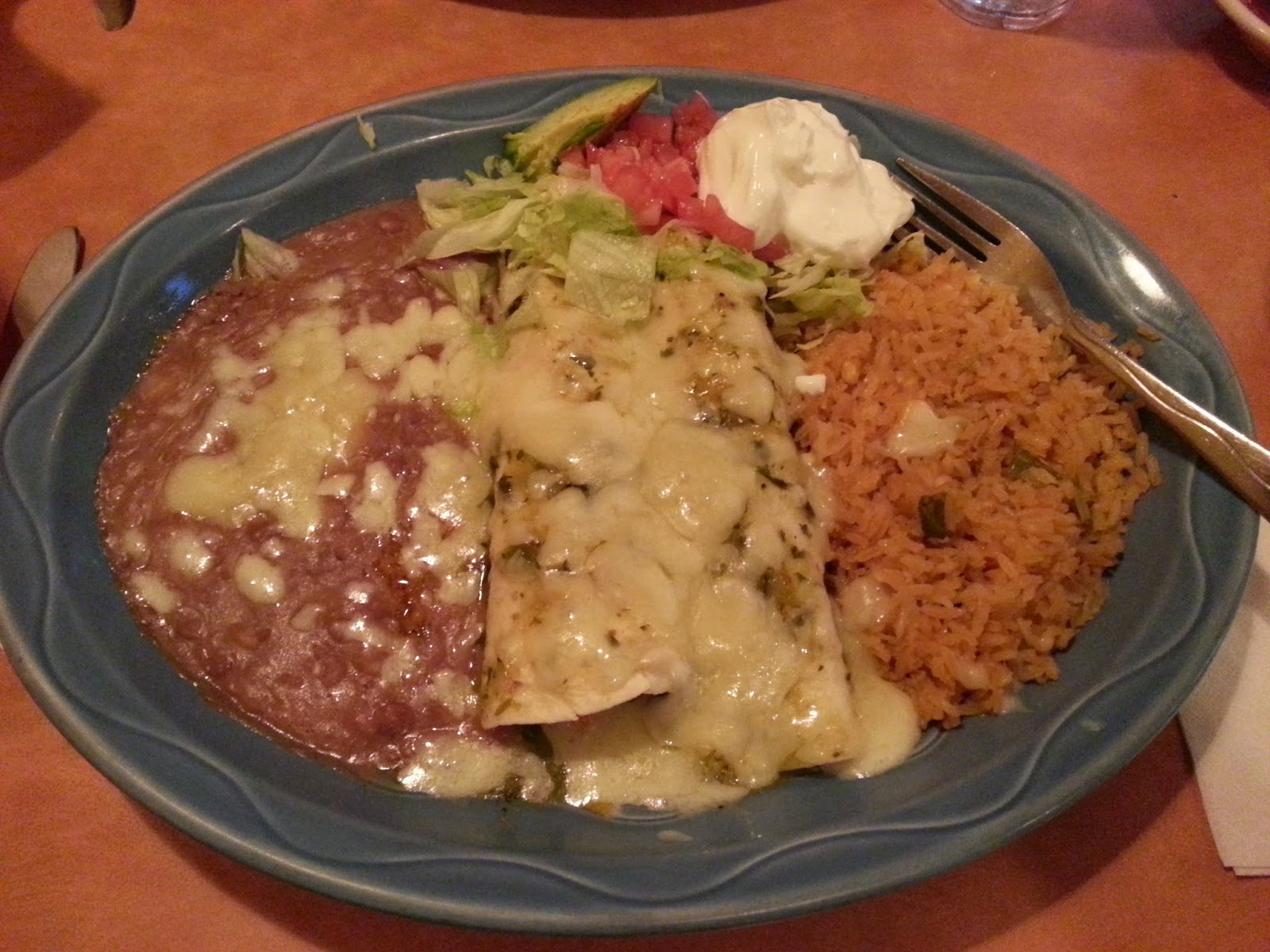 He complimented me on the restaurant, said he had not had Mexican in a while, that he had not eaten since breakfast, was so happy to walk in and be given chips and salsa to eat right away!  I beamed.

We played with each other’s hands above the table.  I rubbed his thumb in a sassy way.  He said he wanted the demure lady to GO AWAY.  He wanted my sassy side.  I told him it’s like having an angel on one shoulder and a devil on the other, arguing.  He said let the devil win tonight.
He slid down a bit in his seat and rubbed his knee against mine.  Very sexy.  Made me tingle.
He looked at the TV showing a soccer match, talked about playing in h.s. and teaching it at summer camp.
The waitress asked if we were finished, or wanted dessert.  He deferred to me and I said no.  He smiled.  He asked if we could have dessert in my car.  I nodded and replied, “Sure.  Worth a try.”
He paid the bill.  I thanked him and we strolled out to my car.  He put his hand on my back and I started tingling even more.

I started to ask if he was okay with me driving somewhere, and he grabbed my face for a kiss!   He seemed very nervous and it was not very good.  He put his hand in my hair to turn my face a bit and it got a little better.  He stopped and told me he was ready to roll.
I had scoped out the parking lot behind a closed Panera.  It has a retaining wall, so no one can see in the front.  It has lights, but there are gaps.  And only a few cars.  I parked two spaces over from the last car.
So we sat there and made out.  Kissing, groping, undoing buttons, teasing nipples, tasting.
He undid buttons on my dress and pulled a breast out from my bra and sucked my nippled.  Oh yes…
He ran a finger down my leg, pulling up my dress, teasing around the edges of my underwear.  He fingered me just a bit, going too fast.  Then stopped.  Ugh.  He didn’t talk… bad.
The lights of the SUV two cars over flashed – we separated.  A guy got in.  Scratched a bunch of scratch lottery tickets.  Played on his phone.  ARGH!  We had a good laugh.  Then a woman came out and got in and they left.  Phew.
We had another good laugh. I asked, “What would you like next?”
He put my hand between his legs.  I rubbed him.  He was VERY HARD.  I asked if he thought it was safe to undo his belt.  He looked around and nodded. So I unbuckled, unbuttoned, unzipped…teased a bit… running my finger around his waistband, slipping one finger under.
I asked if he wanted to come out, thinking I’d take it out thru the slit in his underwear.  He rolled his jeans and underwear down to his knees!  I stared.  He said, “Here’s another piece of my puzzle for you to look at.”  He has gorgeous equipment…long… wide… well-formed.  He has those hip creases that make me swoon!  I was properly worshipful – told him he was beautiful.  He scoffed, said he’d been called many things but never that.  I told him I had seen quite a few and to trust me on this.  He smiled.
I played with him using my hand.  There was pre-cum already. I told him I wanted to taste it.  He nodded.  So I leaned over and did my thing – a first class sassy blow job!

I licked the crown, then blew on it.
He trembled.
I licked it from the bottom to the top, up and down each side.  He moaned softly.
I sucked his entire length deep into my throat.  He moaned louder.
I moved him in and out, sucking, smacking, pumping the skin tight up into my mouth.
I hummed… letting him know I enjoy tasting him.
He squirmed.
Licking, blowing, sucking, smacking, pumping, stroking his balls.
I looked up into his eyes like a good girl.
Between the odd angle and his larger size, I couldn’t deep throat him.  But every time I got pretty far, he moaned.  Very nice.

He rubbed my back, played down my ass crack, and put a hand in my hair, but didn’t push or pull.  As things progressed, his hips popped up toward me.  He told me he was very close…I stopped.  He was panting.  Mmm…. I was so revved up!

I asked him if he wanted to cum? He looked around and said yes. I told him he had to keep his eyes open… both to watch me and to be sure no one walked to their car a few spaces over.  I told him I wished I was little so I could climb on his lap and fuck him.  He said we’d get to that next time.  If I would let him see me again.  I smiled and said I would like that.  He smiled.  Guys don’t usually say anything about next time during a meet… so that was a wonderful surprise!

So I revved him up again… hand, mouth…he moaned nicely, then warned me that he was going to cum and did.  I was marveling at how different he was from most others – very gentlemanly.  It was not my best effort… not spectacular, with all the limits of the car, but he was very polite, kind… sexy.  Perfect!  My inner muscles were pulsing… demanding equal time.
So I swallowed… didn’t lose a drop… he didn’t even need a tissue.  HA!
So… okay… some pluses, some minuses… worth another meet… may get better…
He fell asleep.  I watched him, listened to him breathe… stroked his arm.  It is such a luxury to be able to touch a man!
After awhile he woke up, smiled at me and apologized.  I asked him what he was thinking…
He mumbled something that amounted to, “I’m not… just so… mmmm.”  So I fried his brain. Hee!
I asked if I should return him to his car.  He said, “In a little while.”  He just kept lying there.
He finally rolled to me and kissed some more.  It was better this time.  Then he told me we could go.
I drove back to the restaurant parking lot, got out for a long hug.  He got into his car and drove off.
10 pm Good bye!
Afterwards
He wrote within 15 minutes!   This is the way to do it, gentlemen!

My phone went off as I was sitting at a light in front of a Dunkin Donuts.  I pulled in to their lot to read the message.

A very special evening.   I’m smiling!  I am ready for more!  I wonder how quickly we can schedule another meet?
Yay for sexy local blog fans!  Another benefit to being a blogger!

One thought on “Meeting Landshark”