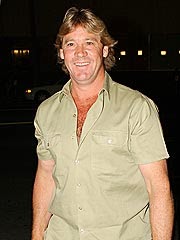 Steve Irwin
Background
I call him Mr. Truck because his AM handle is something like a truck slogan.
Stats Age 52 Height 6″2′ Weight 238 lbs
He looks like Steve Irwin, the crocodile hunter from Australia
From: small town an hour outside of Boston
No kids
contacted me 10/21/12 (yes, exactly 8 mos ago!)
Loves to share porn, critique it, discuss it
Always “going to meet” or “wants to call me” but it never happens.
We talked twice on the phone in the first couple months. He stood me up for another call (wrote later saying he had the flu) and cancelled numerous meets for various reasons.  I decided he’s an email king.
He emailed me on Wednesday with an offer to meet today.  I played along but had no inkling it would happen.  There was no word on Thursday, so I assumed he was going to forget about me again.

Friday he began to give me specific details in a different way from his other offers.

From Sassy: Sounds wonderful!  I have a mini-van.  Whichever car is fine.  When?
Can’t wait to see your smile.  Your hands.  Your eyes.  Ears!
From Truck:  Minivan would probably be more roomy! I should be driving back around 3, depends how early we get there. I’ll call as soon as I leave or write again today if I know more.  Excited to see your pretty face and all your curves, hear your sexy voice in person, kiss your soft lips…
Saturday
From Truck: So excited thinking about what you’re gonna wear today, even if its just normal everyday clothes. Wondering if your world class cleavage will be in view, wondering how your hair and skin will smell, and how your kisses will taste. Most of all anticipating your wandering hands taking full advantage of me, at the same time mine are exploring your soft white skin…
From Sassy: Good morning!  This sounds perfect.  Oh, what fun this is!
The Meet
He called at 3:10 pm – he is leaving the airport having dropped off his wife – how fast can I get to the parking lot where we are supposed to meet?  I tell him 20 minutes.  He starts to say that’s too long –  his wife is going to call him as soon as she clears security – maybe we should meet tomorrow instead?  I tell him I am already on my way, will drive fast and want to see his face even if it’s for 10 minutes!  If it works we can meet tomorrow, too!  I tell him I am wearing a dress that unbuttons… he says come on!
I drive like a demon and make it there in 18 minutes.  Hee.  I see the little car parked against the fence at the back of the parking lot with several other cars, pull in next to it and he waves and smiles!  He rolls down his window, I roll down mine, he says, “Well hello gorgeous!  May I sit in your car for a few minutes?”  I reply, “Please!” and he jumps out of his car, dashes around and pops into the passenger seat!
He’s cuter than he looks in his photos!  Great head of tawny hair, nice shoulders, a plaid summer shirt with snaps and khaki shorts, with running shoes.  He has a great smile and warm blue eyes.  He starts to compliment me – you’re beautiful!  What a great smile!  I adore your eyes!  He looks relieved.  He grabs me for a hug and we grope and laugh.
We start taking inventory, checking out various parts of our bodies.
He likes my hair – comments that it is curly on the bottom and straight on top.  I ask “You remember why?”  He nods.  I tell him it’s good to pull on.  He weaves his fingers into it at the back of my neck and yanks my head back in the typical dom move… I get a tingle. 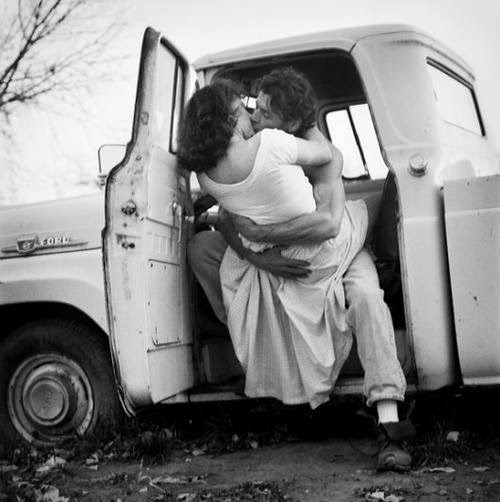 There is serious kissing with tongue, there is touching, he sees my famous cleavage with the lucky black bra.  He adores underarm hair, so I had let it grow in hopes of seeing him – he was bananas over that.  I nibbled on his ear and whispered about other things I’d like to do… whorled it with my tongue and asked if he could imagine my tongue somewhere else?  He moaned.  He put his hand under my dress and played around the side of my underwear, teasing the hair and complimenting me on being natural.  He rubbed down my legs, said I have great skin and I am beautifully proportioned.  He played with my belly button and said what a great tummy!  I know it’s mostly a line but it made me feel pretty and wanted and yay!
He played with my left breast, pulling my nipple out of my bra and twisting it, saying how perfect it is. I looked at it, trying to see what he was seeing.  He played along the side of my underwear at the top of my legs, then went in from the top and dove inside me with his finger… he knows how to play with a clit, oh yeah!  He stopped, kissing his finger and saying “damn, so sweet.  I want that all over my face!”
I kissed him and he commented on how fearless and open I am.  He said he couldn’t wait to be inside me.  I asked if he would do it from behind… he moaned.  So I asked if he’d do it from the side… he smiled great big.  From the front?  Oh oh yes, he said.
He had told me he has very sensitive nipples… I told him to watch me and I unsnapped his shirt, traced a finger from his neck down to his right nipple. flicked it until it hardened to a sweet little pencil eraser, licked my finger and traced around it, pressed a little, then put my mouth on it and make sucking noises.  He put his fingers in my hair and went a little wild.  I hummed and he moaned.  He pulled me up into a hug again, reached back and squeezed my ass, said he couldn’t wait to see me completely naked and be able to explore every glorious inch of my skin.
I put my hand up under his shorts – he had gone commando!  Naughty boy.  But very easy access!  I played with his balls a bit, stretched a finger back toward his ass, pulled the shorts up until I could see his cock.  I licked my finger and swept it around the crown – he closed his eyes and sighed.  I pulled on it a little and he moaned.  He kissed me again.  I told him to open his eyes and watch my hand.  He talked about how hot that was, how he was going to be in big trouble.  I told him I was going to show him the back of my throat.  He moaned.  He said he couldn’t wait to feel his balls on my chin.  I suggested my nose on his stomach?  He murmured approval.  Quite nice patter!
We crossed the 30 minute point and he said he had to go, that he had to turn his phone back on.  He said he knew what he’d be doing when he got home.  I said, “Tell me.”  He said he was going to put on some porn, pretend we were watching it together and pump his cock until he shot a huge load.  I played with my fingers near my mouth, then sucked my index finger to tease him a bit.  His eyes flared.
He promised to be in touch later tonight, see if we could figure out something for tomorrow, but he wasn’t sure – he’s leaving for Europe on Monday – we might have to be on the phone.  I could feel him backing away but kept a brave face.
I smiled and kissed him once more.  He said, “Damn.  We are going to be so good together!  I’ll call you!” and hopped out.  I watched him buckle up and put his car in reverse – he waved and smiled and was gone at 4:05 pm.
Afterwards
From: Truck
To: Sassy
Sent: 8:51 pm
Subject: Holy Wow!
That was great meeting you, was really an amazing experience in a compressed span of time! You are so pretty and so sweet and soooo hot. What a kisser and nipple sucker. I loved when I watched as you flicked my appreciative nipple with you finger and made a remark, ohh man. And what a fun dress…Tomorrow might be busier than I had hoped, I’m still working now, ugh.
Let’s talk soon  xoxo