I made it by 10:05 am!  He was standing outside, pacing.  We had a quick hug, then went in to Panera.  He reminds me of John Goodman in the old days, with a nice smile, average face and a big belly, like a cuddly teddy bear. 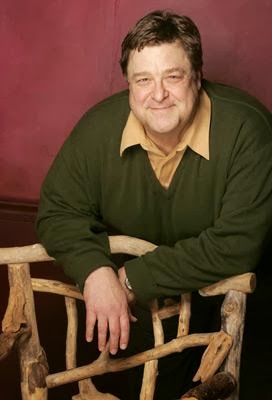 John Goodman
He bought me an iced green tea.  Bravo!  We found a quiet booth at the back and talked.  He was dressed in a Patriots football sweatshirt, jeans and fancy sneakers, with longish straight light brown hair with streaks of gray.  I touched his hand, listened to him… he asked me about my AM experiences and talked a little about his.  He asked if I’d like to go somewhere to talk more privately in my car.  I followed him down back roads to the parking lot of the Hilton.  I thought he was pulling another fast one, but no… he had found a quiet spot in their back parking lot.
We climbed into the back seat of my mini-van.  I had put the middle seats down, so we had lots of room.  He kissed me.  It was okay.  He unbuttoned my top and played with my chest, first over my bra and then he took my left breast out to suck on it.  He got on his knees, took off my pants and panties and licked me, fingering me as well.  He was pretty good at that… made appreciative noises.  He made me cum!  I told him so and he beamed, said he liked the way I taste.  His knees got sore, so I encouraged him to come back up to sit beside me and we kissed some more.  He was impressed I would kiss him after he’d gone down on me.
I asked him what he wanted to do next.  He looked at me and smiled.  I asked if I could taste him and his eyes rolled and he said softly, “I’d like that.  It’s been so long,” with a deep sigh.  I sat at his feet and he helped me get his jeans and dark blue briefs down.  There was a wet spot in the front.
He had a small cock, uncut, like nothing I had ever seen.  The skin came up and over to a little curl, and there was no getting the skin down to get to the crown.  I twisted and pumped, and he got a little bigger, then I sucked him in and licked him up and down… the skin still closed over the top – completely smooth!  A woman in chat told me there is a clinical name for this condition – phimosis.   It’s considered a birth defect that is fixed right away on babies today.  I was surprised that he didn’t warn me, or say anything at the time.  I thought I handled it well, going about pleasuring him without comment.  I wondered at his sensitivity… never being able to feel the head through the extra skin? 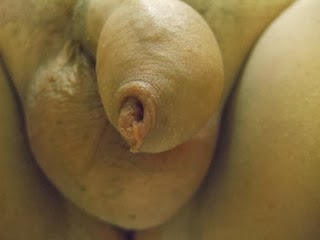 photo from the internet (not him but very similar)
I could taste pre-cum… very mildly salty.  I did my magic with my mouth and hands.  His head fell back and he moaned sweetly, breathing heavily.  He said, “If you do that, I am not going to last long at all.”  I nodded and deep-throated him and he moaned.  A very small bit of cum came out and I swallowed it easily.  I only realized he was done when he began to get soft.  I stayed down, talking with him while rubbing his legs and tummy.
I asked him if he could give me a name to call him… didn’t have to real.  He joked that I could call him late for lunch.  So I never got a name.  Bad sign #1.  He seemed very tired, like some men get after finishing.  He said it usually takes him an hour to recover!  I told him I knew some tricks to speed that up. He told me he needed to get going.  That was bad sign #2 (leaving early) and a big hint that maybe it had not been so great for him, but he said it had been wonderful to cum in my mouth.  He had not reached that level with anyone else from AM.  Bad sign #3.  I tried not to think about it.
We put our clothes back together and he helped me out of the back seat, gave me a quick hug, jumped in his car and was gone.