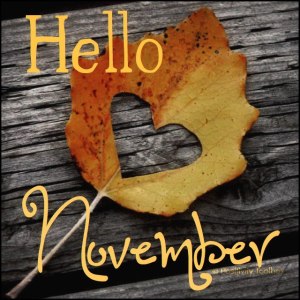 9:11 AM Phil
Where did the year go?
9:33 AM Sassy
Good question!  Family days, work, projects, fantasies of a handsome man…

6:05 PM Phil
[photo of his phone screen with the Rocky Horror Picture Show music “The Time Warp” playing
Hee hee
6:12 PM Sassy
I never saw that movie.
7:03 PM Phil
Oh you have to see it! 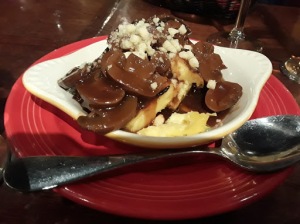 Polenta al Malbec – pan seared polenta,Malbec-mushroom sauce,
truffle oil, parmesan cheese – this was one of the
tastiest dishes of the year!

Hubby’s steak tips with peppers and onions, and rice pilaf 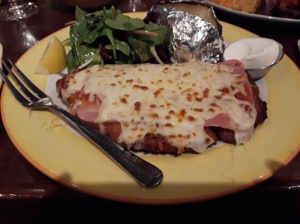 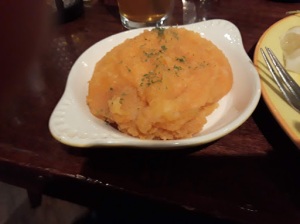 10:21 AM Sassy
I’m driving up US 1 heading to the outlets in Maine with my NC cousin. Gonna get lobster

11:30 AM Sassy
Just crossed into Maine. Thought of you as we passed Portsmouth

The power is out from the big storm so we’re heading back to NH for lunch
12:16 PM Phil
And you are eating at Warrens

View out the window 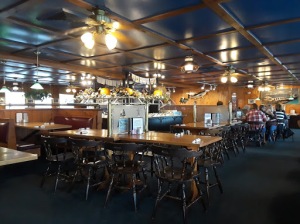 The dining room and buffet 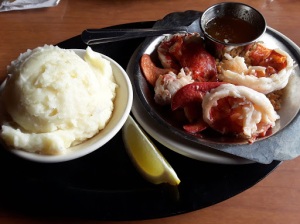 My lobster sauté with mashed potatoes

A little salad and their famous pumpkin bread

The souvenir shop next door – The Captain’s Treasure Chest
and Pete’s Stateline Sweets – I actually shopped!  Got some
excellent end of the season deals!
4:49 PM Sassy
Kittery Trading Post – the only outlet with power today!  I shopped some more!

This place is massive! 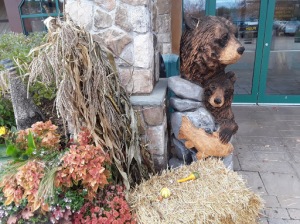 Lovely autumn decorations at the entrance

Historic photos in the entrance

They sell everything for indoors and outdoors… not the moose.

4:46 PM Sassy
Saw “Victoria & Abdul” movie.
It is fantastic!  Such a fascinating snippet of history. 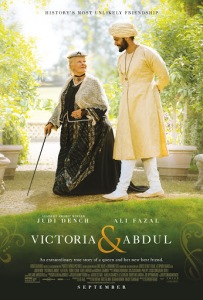 5:23 PM Sassy
@Blue Shirt Cafe in Davis – Delightful dinner and conversation with my wedding attendant!  So good to catch up.

8:57AM Sassy
Happy Saturday kid!  Hope you have a wonderful NY day!
8:59 AM Phil
You too!
Going apple picking once my brother gets done playing with his new toy
[photo of some huge tractor-like vehicle]
9:00 AM Sassy
Whoa!

11:49 AM Sassy
First time at Temple Bar on Mass Ave in Cambridge

Wild mushrooms with grits and eggs 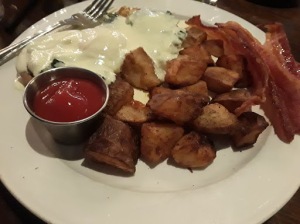 1:47 PM Sassy
At the Opera House for the “Fun Home” matinee!  We got 8th row center seats for free from an usher who is a friend of a coworker.  Wow! 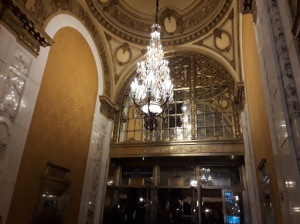 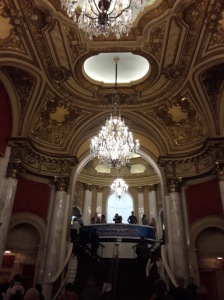 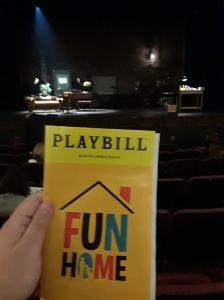 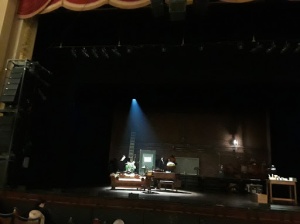 6:00 PM Sassy
Sitting in the car waiting for Hubby.  He’s visiting a friend in the hospital.  She tried to kill herself last week, but is getting excellent help now and seems to be on the upswing.  It helps him to help others who are worse off.
8:59 PM Sassy
Nothing like Asian fusion on a Saturday night!
First time at Shines Fresh Asian restaurant in Belmont – Korean, Thai, Chinese and Sushi!

My Thai iced tea with boba 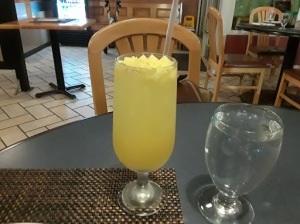 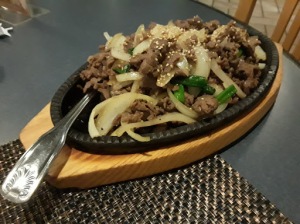 Hiya Brett! Thank you for a lovely afternoon! It was so many kinds of bliss!

Hope you had an easy trip home. It took my nearly an hour but I kept moving and thinking of you and smiling.

Have a wonderful weekend!

11:54 PM Sassy
Wow!  Another menu I drooled over.  What did you eat?
12:01 AM Phil
I had Antonio’s Pasta and a Caeser salad. Delicious.
Tonight had the schnitzel. Delicious
12:02 AM Sassy
Mmmm… schnitzel.  I need to find that around here!
Your mom doing well?
12:12 AM Phil
She is and she really enjoyed the evening. Have not been there in 35 years but it was the same which was cool, had a neat German band. It was fun. Waved at the parsonage for you
12:13 AM Sassy 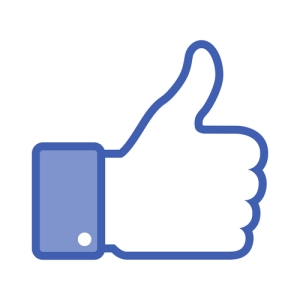 Yay! I am so excited to see you! Tomorrow! Mmmm…. I’ve already started thinking about your arms around me. And your hands on my chest. Tingling!

I made a reservation. Let me if I should meet you for lunch or at the hotel. Thanks!

I don’t think I can make it for lunch this time. I’ll try to get there as early as possible. Let me know what time you think you will be there.

Hi Brett. Let’s aim for 2:30 pm? Don’t worry if you are later than that… I will check in as soon as they let me and wait in the bar. Can’t wait to hug you! And kiss you!!

7:44 AM Sassy
Good morning kid!
Hope you have an easy trip North!  Please say hello to the old home town for me.
8:23 AM Phil
Having a great time working from home in sweats today.

Head north about 3:00 and we are going to go up through Pennsylvania for something different.  Taking Mom to Bavarian Manor in the Catskills tomorrow night, family Halloween Party Saturday, should be a great weekend!
Good morning to you too, have a wonderful day!
8:24 AM Sassy
Wow!  Sounds so fun!
I’m taking it easy at home today, then a wacky weekend.
Seeing The Northerner tomorrow!
Brunch with NC Cousins Saturday, then I got a free ticket to see “Fun Home!”
Sunday brunch with NC Cousins, then a rare chance to see my wedding attendant in town from Baltimore for dinner!  Whee!
8:31 AM Phil
That sounds fun too!
Enjoy the Northerner and I’m sure seeing your attendant will be fun.
8:31 AM Sassy
I am drooling over the Bavarian Manor menu… had not heard of it!
12:00 PM Phil
Supposed to be really good

Sassy,
I haven’t heard from you in a while!
What wonderful fall weather we are having. I’ve been able to spend a little time outside.
Are you keeping yourself satisfied? Maybe you’ve found a new lover.
Are you busy with community projects and other extracurricular activities?

Hiya Brett! So wonderful to hear from you! The weather has been amazing – glad you got out into it.

I’ve been so busy at work and with community projects, but I finished my last big work event for awhile so I am hoping for quieter days!

I’ve been playing with my toys and behaving otherwise, waiting to hear from you. 🙂

Hi again. I should add that I am off work tomorrow and Friday. If you can get away from the office either day, let me know. It would be fantastic to see you!

Pretty sure I could leave early on Friday!