I usually wait a year to tell you my stories, but there is something special going on today. The sexy and talented blogger Ryan Beaumont is posting about meeting a certain Sassy Girl last Thanksgiving! So pop over to his blog – The Ashley Madison Adventures of A Regular Guy Gone Bad – for his take on our historic blogger summit!

Here’s my side of the story of the Southern Gentleman and the Boston Gal meeting below the Mason-Dixon line!

Sometimes you do what you have to do, even if it is the last thing in the world you want to do. I drove over 2,000 miles to the Midwest and back over Thanksgiving to take Hubby to eat turkey with his family. His dad is getting on in years and begged me to bring his son so he could see the entire family one last time. I couldn’t believe he picked Thanksgiving weekend to summon us! Hubby won’t fly so it means driving or taking the train. We’ve done both, and I prefer driving so we can stop along the way to see friends. Why couldn’t it be July 4th? Or Columbus Day weekend? or any other time when the entire world is not driving to see their families and it might snow and the hotels jack up their rates and friends are probably busy with their families? Argh.

I figured out how we could avoid the busy travel days – leave Monday, stay with friends in Buffalo and then head on west and return on Friday/Saturday – only be gone five days. There was even a blog pal out near Buffalo who might give me a hug! Then the Great November Lake Effect Blizzard hit Buffalo with seven feet of snow, and our friends said, “Avoid this area!” So I re-planned the entire trip to go through Pennsylvania and see another set of friends. I dreaded having to drive all that way. I had never been away from my family at Thanksgiving and worried about being so far away from my elderly mother.

I took deep breaths and tried to think of things that would make the trip bearable. Seeing friends would definitely help, but I finally decided I needed a treat. I wanted the last stop to be someplace fun, with good food and a nice place to stay and someone fun to visit. I scoured Google maps from the Midwest to home… trying various routes to see if anything popped out at me. As I was packing Sunday afternoon, it hit me. I could go see the great Ryan Beaumont, blogger extraordinaire!

I had so many questions. Would he want to see me? Would he be home? Would it be safe for him to meet me? Show me around his town? Share his real life? He writes about the beauty of his area… the places he goes for meets. I want to see! And I want to see him. Who knows what could happen? We don’t flirt…much… or talk sexy or any of that… would that change in person? Was it a good idea? Would he even want the gray-haired curvy old lady? He doesn’t even know about the erotica I’ve written about him. Oops.

Kylie Minogue – I Should Be So Lucky
https://www.youtube.com/watch?v=bMCXx5k01Tg

I emailed him to ask if he’d be home and could see me the day after Thanksgiving? Could he recommend a hotel and restaurant? I didn’t hear back and wondered if he was already gone for the holiday. Finally Monday morning, as I was walking out the door, he wrote back! He would be there! He could see me! He thought it was a great idea! He gave me lots of travel tips. Hooray! I was so excited! I jumped on the internet to reserve the hotel. Something to look forward to! and someone to keep me smiling across the miles!

Ryan was one of the first bloggers to write to me when I started my blog. I had no idea when I started posting that it would lead me to a wonderful community of fellow writers and fans! He was a great help with everything from technical tips about Blogger to how to stay anonymous. He found me through the grand poobah of sexy bloggers, Riff Dawg. I started blogging because I wanted to fuck meet Riff. But his blog is long gone and he’s on the other coast somewhere. I still dream of fucking him shaking his hand (or more) someday. Meeting bloggers has always been something high on my list of fun things to do! I think Ryan wants to be Riff when he grows up. And when Riff disappeared, the mantle of Ashley Madison blogger and community organizer passed to him. He wears it well, even though he is a very different person. There is something so alluring about the guy… tall, handsome, Southern Gentleman, music aficionado, politics wonk, and fellow traveler on the strange and wonderful roads of Ashley Madison, blogging and zero-sex spouses. And he has been a great friend to me.

Hubby and I survived the drive out and the visit with the family. Friday morning it was time to head back East. We had to drive more than 500 miles so I got us up and out early. I drove and drove… it was brutal. When we stopped along the way, I let Ryan know where we were and he gave me esoteric facts about the area and recommendations on places to eat or shop! He is such a font of information! We made a plan to meet in the morning for a tour of his area. Finally, eleven hours later, with my eyes glazing over and every muscle screaming for me to get out of the car, I found the charming hotel in the beautiful town outside DC!

We dragged our stuff to the beautiful room, and had time to stroll around the grounds. I had made a dinner reservation and fretted about making it, but we made our way to the cozy dining room right on time. We tried soups and appetizers and entrees and desserts! 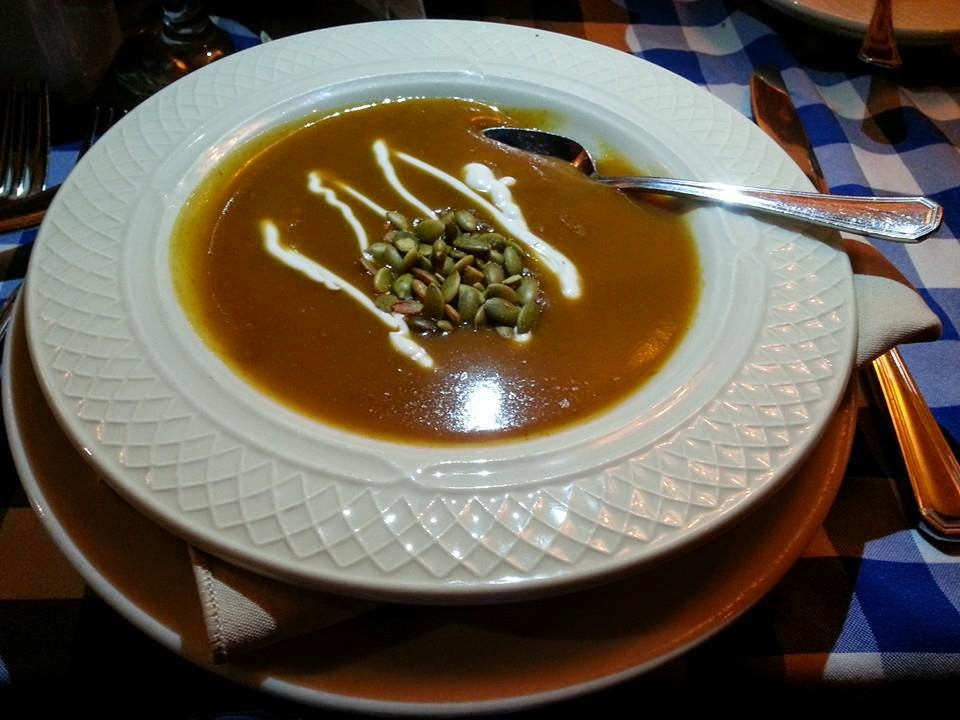 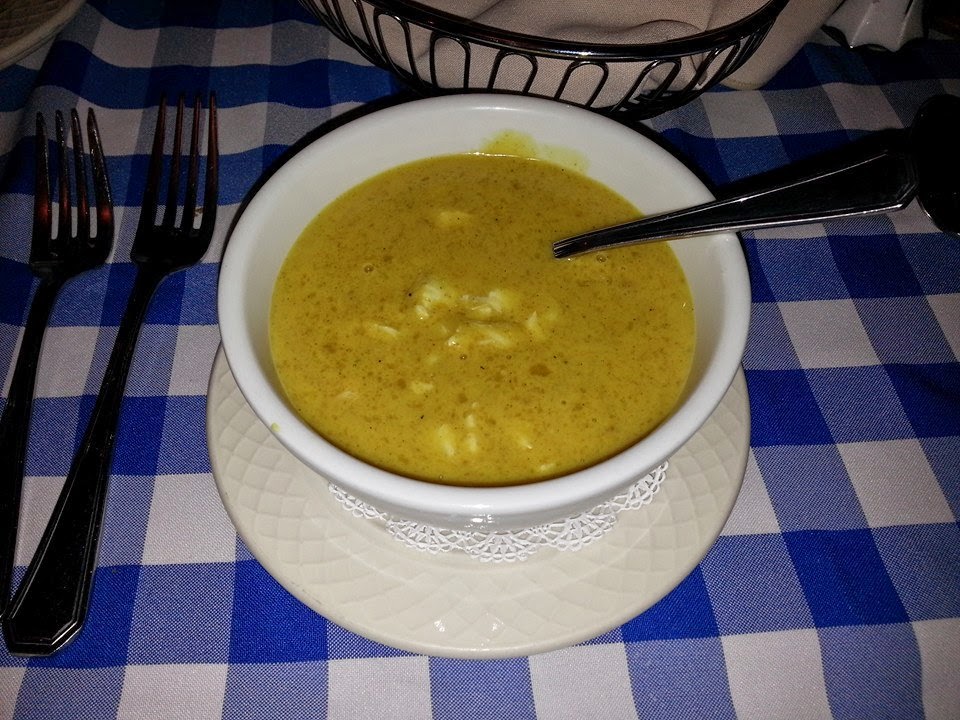 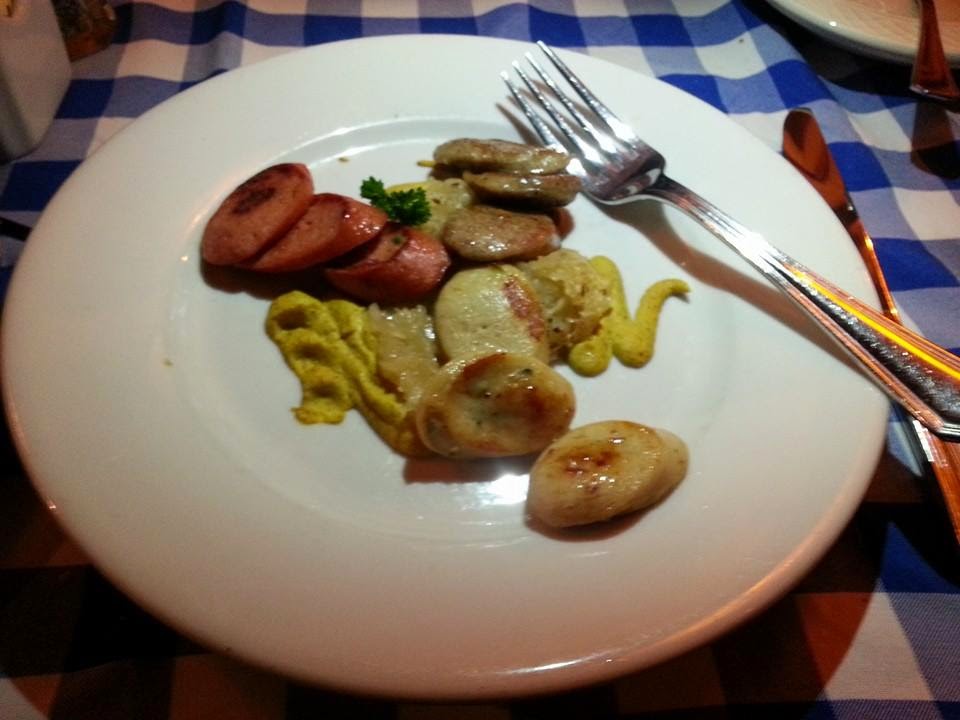 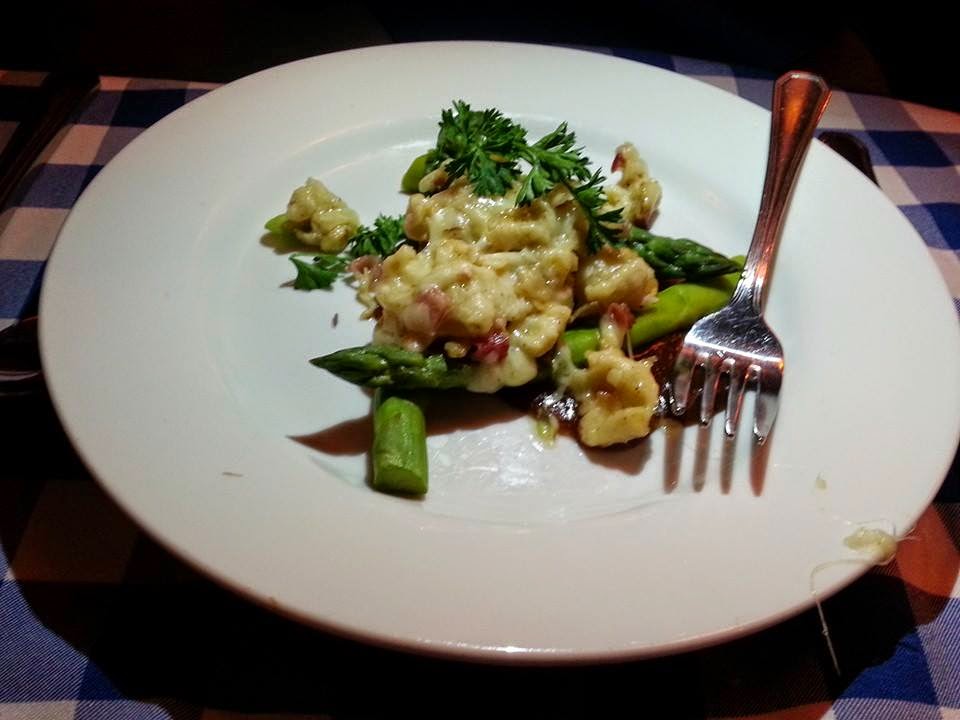 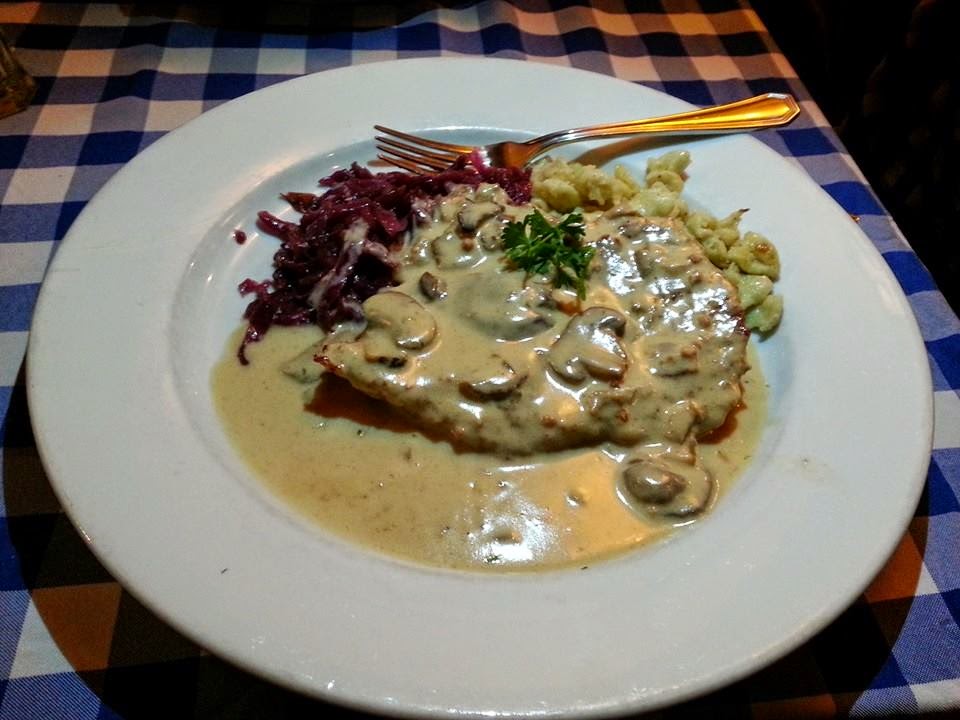 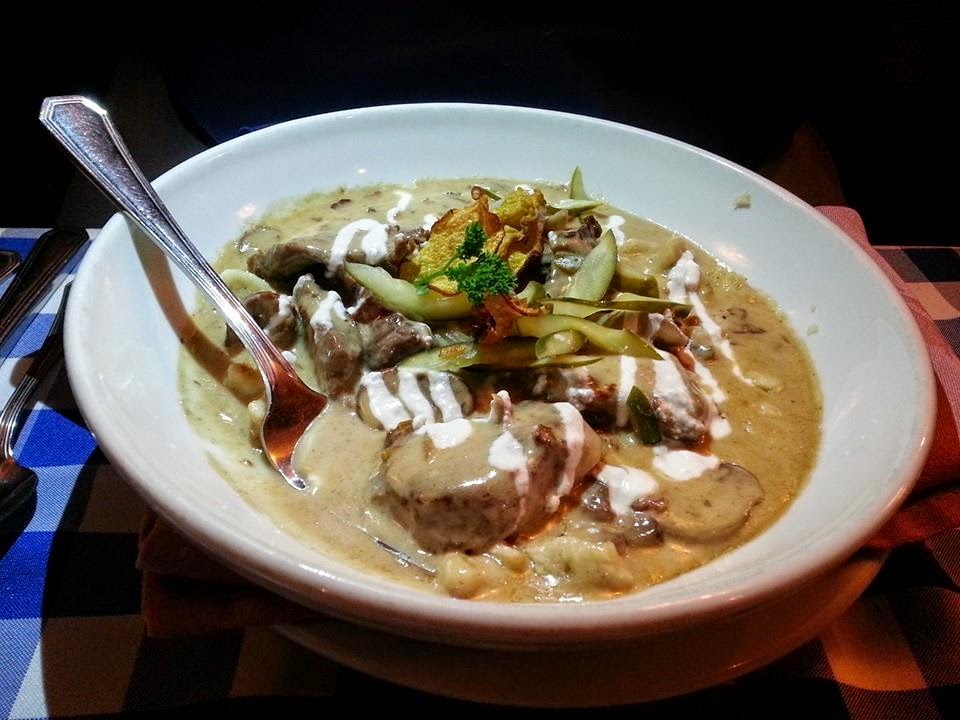 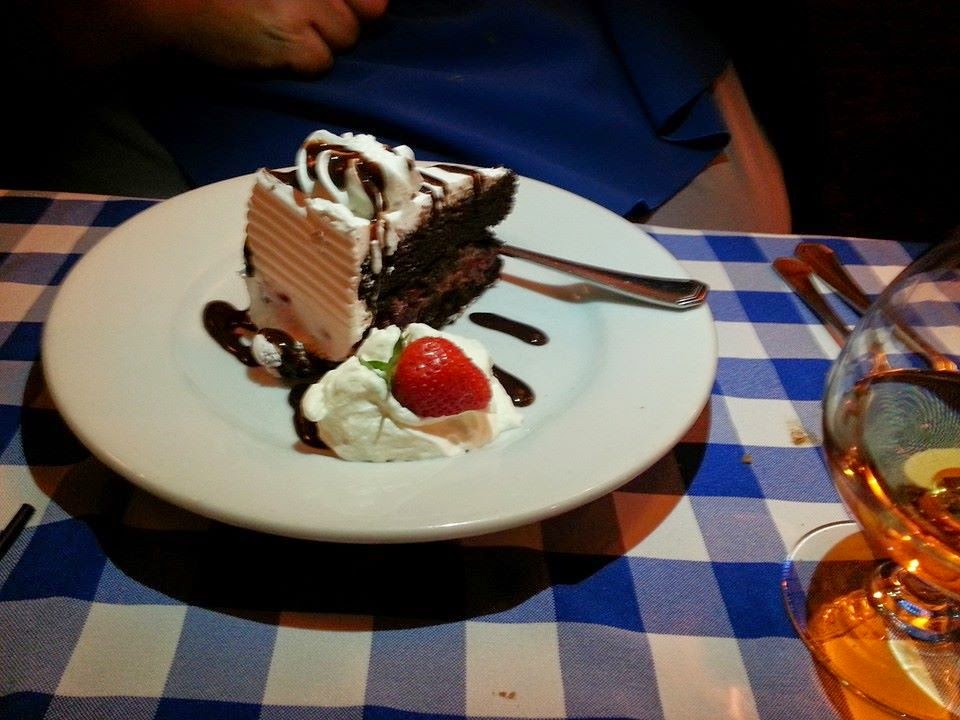 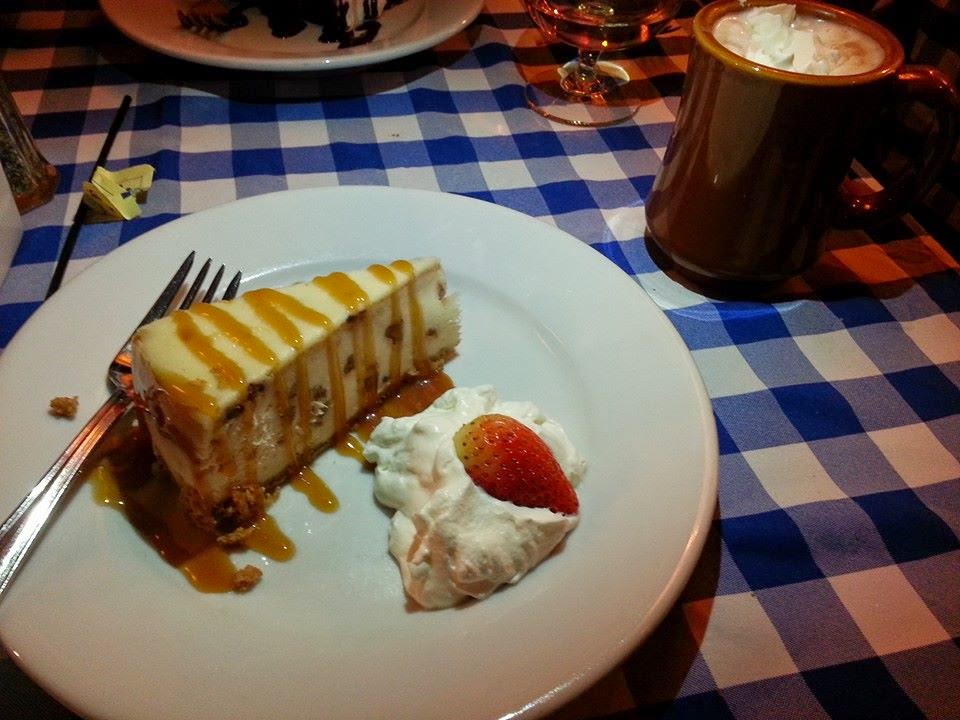 Salted caramel pecan cheesecake
with hot chocolate for me

It was one of the best meals I’ve had in my life. Ryan knows his restaurants! I sat there satiated and pleased, unsurprised that Ryan had recommended just the right place. I daydreamed about telling him as he showed me the sights and thanking him in a sassy way!

Then there was a power failure. It was only dark for about 3 seconds. My phone pinged. Ryan had to stop in at work to check on something, and could spare a few minutes to stop by the restaurant! The timing was perfect – we had just finished dessert and were paying the bill. I was so nervous! I had not prepared myself to see him tonight. I was tickled that he would change our plan and make time to see me as quickly as he could after I got into town!

We were waiting in the entry when he came in. I opened my arms and hugged him tight. Dreams do come true, dear readers! Mmmm… there was such a feeling of warmth and comfort with a little sexiness mixed in – he is so tall and well-built! Beautiful eyes… sweet smile… I never wanted to let go. I knew right then it would be alright.

I introduced him to Hubby. They shook hands and Hubby took off. Ryan guided me to the bar. We got drinks and sat. Staring. Try to match up the reality with the photos and long-imagined persona. He looks good in photos but in person? He is gorgeous! He smiles! His preppy clothes fit him well. I could definitely check off the “better in person” box on Ashley Madison! He has blogged that he looks like a Kennedy. I agree. I see flashes of the long ago Joe Kennedy Jr. and JFK, bits of the Kennedys about his age like Robert Jr. or Max… makes me wonder if philandering Jack Kennedy ran into Ryan’s mother at a party some night and… probably not. But he most looks like Greg Kinnear, who has played JFK and is better looking! 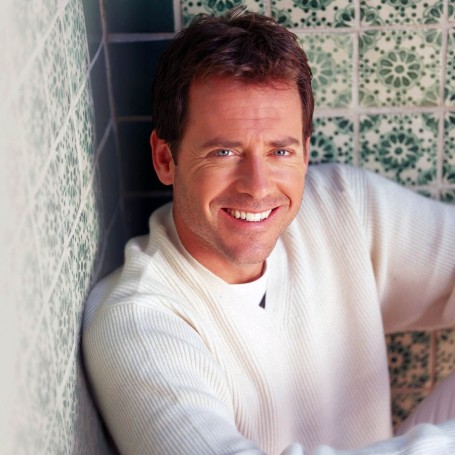 Ryan is mostly interested in the demure business lady side of me, so that’s all he saw. He stood about 3 feet from me at the quiet bar. I couldn’t decide if he thought I would grab him if he was closer or he thought I was so strange he didn’t want to get too close! Probably just being safe, in case anyone he knew saw him.

We only had about 15 minutes then he had to scoot home. I walked him to his car and stole another hug. He is a great hugger! He left me with a promise to pick me up in the morning for the grand tour!

Hubby and I had a memorable breakfast at the hotel. Such an elegant place with incredible food! I had crab eggs benedict for the first time! 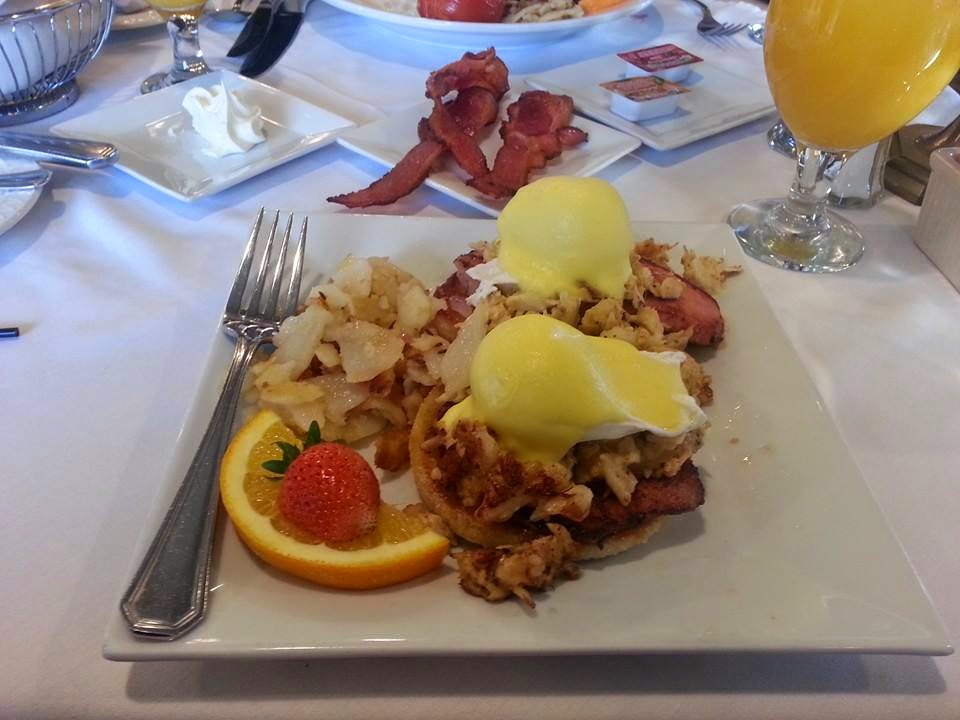 Ryan picked me up and gave me a tour of his town! It reminds of Maine with little shops and historic buildings and beautiful vistas. And he is the best tour guide – with stories full of history and quirky neighbors and politics and women! I can see why he adores it there. He showed me where he meets Sandee and where he works. It was so amazing to put him in context!

I wish I could tell you I grabbed him. I wanted to! I almost did… I so wanted to press him up against the wall in the stairwell at his work and kiss him silly, groping like the dickens! I could envision undoing his belt and… But I got no indication of interest. So the demure lady was polite and funny and introspective and Sassy stayed under wraps. Probably for the best.

He is such a good guy! We talked about anything and everything – sports, history, restaurants, other bloggers we know, Philip. It was so incredible to be open and able to share. I will tell you a secret. He writes like a goofy guy but he is really smart and sweet and juggles a serious job, active kids and the coldest, meanest wife this side of the Monongahela with aplomb.

The time passed much too quickly and he took me back to the hotel. He had to pick up his kid. I had to head off to the North. He took me to hotel door and drove away.

I so want him to be happy. How is it there are so many men like Philip and Ryan and most of the men I meet on AM who have everything except a wife who will be nice to them and have sex? They are good guys trying to make the best of a bad situation. I want sweet, loving wives for them all!

I was so enthralled with the town and beautiful vistas surrounding it, I took Hubby on a mini-tour on our way out, telling him the fun facts Ryan had imparted. I wished for another day or two or three to explore the area. I made myself a promise to come back. I hope I can keep it!

If you ever get the chance to meet a sexy blogger? GO FOR IT!