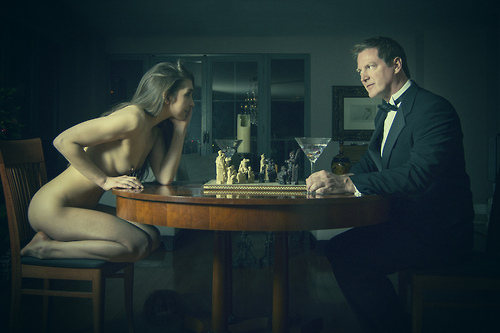 Here’s this week’s Flash Fiction Friday challenge from Advizor54’s blog.  My take is below.
Click over there to see what he and other bloggers made of this photo I sent him.  Wow!  He used a photo I suggested!  Whee!

We were lying in bed, revelling in the afterglow.  I was playing with the hair on his chest, whispering in his ear, waiting for him to be ready to go again.  The warm breeze blew the lace curtains back and forth, cooling the tropical air and our sweaty bodies.  The streetcar rumbled in the distance.
“Was it when you arrived and saw me in that dress?” I asked.  I stroked down to his belly button and back.  He smiled but shook his head.
“After you tried the crawfish etouffee I had the chef make especially for you?”
“Nope, though that was the best dish I’ve had all week,” he said.
“What about when I passed you the fresh chocolate raspberry truffle?” I guessed.  He shook his head again.  I had read an article about how they were his weakness.
“Was it when I invited you upstairs to play chess?” I asked him.
“No,” he replied, not telling me when he figured out my strategem.  I twisted his nipple and he moaned sweetly.  “I thought you were after Sergey.  He is very good,” he told me.
“Was it the perfect martini?” I asked, glaring at him.  He must have known when I served his favorite mixed drink!
He shook his head.  “It was delicious, but no.”
“Because I let my hair down?”  He pursed his lips, thinking… and shook his head yet again.  He made little circles on my side that made me tremble.  His hands are amazing!
“I did begin to wonder when you pulled at your dress, giving me a saucy glimpse of your black bra…but I still wasn’t sure,” he admitted.  I grinned against his shoulder and nibbled on his ear.
He wove his hand into my hair, pulled my neck back and bit me playfully in that magic spot.  Oh yes!  Maybe he thought it would end the questioning.  Ha!
“Was it when I beat you at chess?” she pushed him.  He looked away, then back and shook his head.  He closed his eyes and she wondered if he was falling asleep.  She reached lower to stroke his hip.
“What about when let the top of my dress fall down?” I suggested.
He chuckled.  “I didn’t know what to think then!”
“So when did you figure it out?” I asked, exasperated.
“I’m still not clear on your plan,” he answered.  “I need to do more research.”  I poked him in the side and he took my left breast in his hand, pressing, squeezing, teasing… I lost my train of thought for a moment, but got back on track.
“I suppose you’ll want a rematch?” He looked puzzled.  “At the chessboard, I mean,” I clarified.

“What, so you can beat me again? No thanks,” he replied, ducking his head to suck on my hard nipple.  My blood began to boil.

“Have you ever lost to a woman?” I couldn’t restrain my curiosity.
He shook his head again. “I’ve never played chess with a woman before.”  That surprised me.  He seemed so… experienced.
“Do you usually beat the men?” I asked.  He nodded.  He was not going to admit he had not lost a match in years.
“Are you hungry?  We could order breakfast from room service,” he suggested.  “Beignets?  Chicory?  Sausages?”
“How long do you have?” I asked.  Reality was crashing in on me.
“A couple of hours… “ he sighed.  I smiled that he might be as reticent to part as I was.  I rolled over on top of him, pulling another condom off the nightstand, ripping the foil, and rolling it over him quickly before pressing his beautiful cock inside me.  He groaned and shifted his hips to get deeper.
“Promise me you’ll teach him?” I asked. “For free….” I pushed my luck as I pushed him even further inside.
“Whatever you want, you sexy woman,” he moaned.  “You really play dirty,” he pointed out, bouncing his hips up to drive me crazy.
“Promise!” I insisted, moving up and down on him, watching his eyes on my bouncing tits.
“I solemnly promise I will teach your son to play chess,” he intoned.  My mission accomplished, I lost myself in the most amazing sex of my life.