Phil drove me to his office; he’d forgotten something at work.  He gave me the nickel tour and let me see where he works!   It was very odd to see people salute him!
We went to Crystal City in Alexandria, VA.  We sang along to the 50’s SIRIUS radio station.  I tried not to pay too much attention to the lyrics of Neil Sedacka’s “Breaking up is hard to do.”  He stopped in at Macy’s department store looking for knives for a wedding gift.  He remembered I hate shopping, but it was fun with him.

He took me out for Greek food at Athena Pallas. Yum. 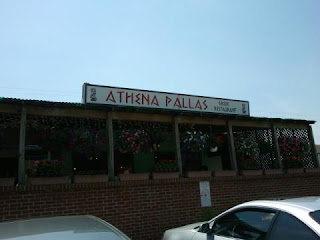 We had a charming older male waiter.  I introduced Phil to taramousalata, a wonderful pink salty caviar dip. We shared that spread on pita bread and stuffed mushrooms for our first course.  He had moussaka.  I had a combo plate with moussaka, grape leaves in lemon sauce, spanikopita, a meatball and pastichio.  I shared a lot of that with him and there were still leftovers.  He got a bit snockered on a half carafe of red wine, and starting going on a bit about drinking binges in a villa in Corfu, the night in Turkey smoking cigars in a British pub,  a shopping trip in St. Thomas, and the night in Sorrento.  I had a moment where I knew I had to get away from him.  So I went to the bathroom and thought, “This will keep me from missing him overmuch.”
I had a magic moment when it came time for dessert – I asked if they had galaktobureko [a philo custard square], which was not on the menu but is a standard in authentic Greek places. The waiter smiled and said he’d check, and brought out a slice! Yum. Phil loved it, and was astonished at how savvy I was to know to ask for it.  He savored a scotch and we split the sweet pastry.  The waiter asked if I was Greek!  I said no, I just love Greek food!
I grabbed the check and paid.  Phil raised an eyebrow but did not argue.  He had been so worried about money, I figured it was my turn and it would make us about even.
Sassy – Flight $149 + Parking $4, Greek Dinner $72 = $225
Phil – Hotel $98 + Thai Dinner $82 + Buffet lunch $25 + Airport parking $12 = $217
We strolled out to the car, and I was desperate to kiss him.  I pressed him against the car for a lovely kiss in the parking lot.  It started to rain but we kept on kissing.  He is such a fabulous kisser!  I was worried about him driving after all that scotch and wine, but he was completely steady.  We headed back to the room.  The gate guard snapped to attention and saluted him as he presented his ID.  I just can’t get used to that.
We got back to the room and he went outside to call home.  I sat at my computer reading headlines, and showed him the ESPN footage of Roy Halliday’s perfect game during the play-offs when he returned.  He was very interested.  Only the second one in Major League Baseball history!
We collapsed on the bed and fooled around for a couple of hours.  I was a little dismayed that he was falling asleep.  But just kept doing what I pleased, with him perking up now and then for specific things he liked.  He does have magic hands.   He made me come with just his fingers.  He was pressing straight in horizontally, and I told him to curl his fingers and aim for the ceiling.  He understood and changed the angle.  Wowzers.  He did amazing things to my breast with his mouth.  Marked me.  Heh.
I asked him to tell me what he wanted, and he climbed over me with a knee on either side of my face and presented me with his cock for me to suck on!  Whee!  I put my head over the side of the bed, and managed to get it quite a ways down my throat, and massage him at the same time until I got a moan out of him.  And when I told him I needed him inside me, he perked up and put my legs on his chest and fucked me good fashion.  Whee!
He fell asleep a little before midnite. I caught up online, wrote to my pals. And started to prep to leave. I dread leaving him but I am ready to go home.
I posted a blog entry about my day and managed not to lock it.  Arrgh!  Luckily, my sister saw it and called me and told me to hide it.  It was only up about five minutes.  Phew.  A vivid reminder of how easy it would be to screw up and let the world in on my secrets.  Ugh.  I am not used to this double life!

I sent Phil a message before I went to sleep. the way I always do.

October 7 at 12:53am
Thank you ever so much for sharing such amazing dinners! Here’s a list of the three new foods I shared with you:
Thai soup – tom ka gai – coconut soup with chicken
Greek appetizer – taramosalata – salty pink blended fish roe dip (served with warm pita bread)
Greek dessert – Galaktoboureko – custard and phyllo dough coated with clear sweet syrup
Yum. Order them again and think of me. 🙂