Monday, September 1, 2014  LABOR DAY
I didn’t sleep well.  Not sure why.  Kris got up to use the bathroom about 5:30 am and I couldn’t get back to sleep.  So I reached over to touch him.  He was already hard and got much harder as I pulled and twisted and squeezed his cock!  I took my time and enjoyed exploring his balls and cock in different ways.  He finally stopped me and started playing with my clit.  He got me all revved up, then pulled off my underwear and pushed inside me.  Oh my… it felt so amazing as he pushed up from underneath me.  I slammed back into him.  I was so wet!  He came hard.  I gushed all over the sheets!
We got dressed and went up to the hotel breakfast room to feast on the free breakfast.  It was one of the best I’ve seen!  They had an incredible assortment of baked goods – muffins, coffee cake, yogurt, toast, english muffins, bagels.  I had OJ, hot chocolate, a square of coffee cake.  Then I went back for a blueberry muffin.  Then a bagel with cream cheese!  Yum!  We sat in the big sunroom that would have looked out over the bay if it wasn’t fogged in!
Kris went back to the room to make phone calls to check on a new renter’s references.  I went for a walk down the huge lawn to the water’s edge.  I went back to bed and napped for a couple of hours while he worked on his computer.

View from our balcony… there’s beautiful cove out there when the fogs lifts!

The main building and glass sunroom/breakfast area at the hotel

Roses in the rain

Fabulous art in the breakfast room – a big fish made of shells!

Our building at the hotel

Seating area looking over the bay

The hotel entrance
We checked out a little after 11 am and got on the road again.  We had planned to go to Acadia, but with the fog there was no point.  He was still fixated on getting his ear piercing fixed, so we headed for a big mall in Bangor.
We drove up the coast, back to Camden to look around.  It is a lovely town with a harbor full of boats!  We went on up Rte 1 and the fog began to burn off!

The Camden harbor in Maine 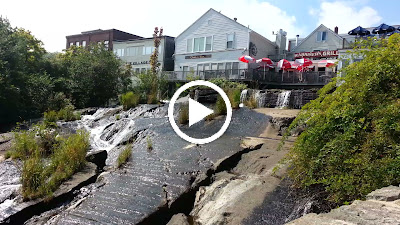 Quick video of the waterfall in Camden

Photo of the waterfall in Camden

The main street in Camden

Flowers near the Camden Library

Flowers near the Camden Library

Flowers near the Camden Library
We saw beautiful little town and coves.  We went into Belfast to look around then on to the Bangor Mall.  He had an odd spell, insisting on paying me for the earring I bought him, and insisting on paying for lunch when we’d agreed meals were going to be on me.  I argued and then let him.  It felt like he was pushing me away.  But my lack of sleep was catching up with me, so that might have made me less able to figure him out than usual.

Maine State Ferry coming from Islesboro
into Lincolnville terminal
We had a late lunch at Ruby Tuesday.  They brought us these delectable little biscuits with onion and spices and cheese.  I could have eaten a dozen! They have an incredible salad bar!  I haven’t seen one of those in a long time.  I tried the potato salad, broccoli ham salad, waldorf salad, pasta salad and various veggies with ranch dressing.  I could’ve just had that, but Kris convinced me to order an entree.  So I got the pork chop with green beans and garlic mashed potatoes.  Yum.

My pork chop at Ruby Tuesday’s in the Bangor Mall

The fantastic salad bar at Ruby Tuesday’s in the Bangor Mall
He got his ear re-pierced and we got back into the car to head South.  I suggested we take 95 to make time, and head for Ogunquit for a late supper.  We went through more bad weather – a terrible thunderstorm!  He needed a break from driving, so we stopped at the Gardiner rest stop.  It is a lovely new building with a food court and “Made in Maine” shop with gorgeous, super-expensive artisan’s crafts.  Kris wanted to buy me a birthday gift, but I could not see letting him spend 3x normal prices and I don’t need stuff.  Just as we were leaving, his wife called.  I left him alone on the patio and went back inside to get an iced chai latte and some mixed nuts from Starbucks.  I read my email on their wonderful wifi and waited.  Kris finally came to get me after 45 minutes and we continued South.
It was clear we were not going to get to Ogunquit in time to eat before the restaurant I wanted was closed.  So I searched the web for places closer, in Kennebunk.  We made it there about 8:30 pm and stopped at the Bull and Claw.
They had another amazing salad bar – with 3 soups too!  We attacked that.  Then I had their “lobster louie” which I thought would be lobster pie but turned out to be a baked stuffed lobster… for only $20!  Kris got the mussels and shrimp scampi linguini.

My baked stuffed lobster at the Bull and Claw in Kennebunk

Interior of the Bull and Claw in Kennebunk
We headed on South and got to my place about 11 pm.  Kris was getting punchy, had the music turned way up and bounced around.  I almost made it, but asked him to turn it off as we made the turn onto my street.  My head hurt and I couldn’t take it another second.
We took our stuff inside and he fell asleep quickly on the sofa.  I did some work on my computer, then headed off to bed at 12 midnight.