Wednesday, July 10, 2013
To: The Body
From: Sassy
Sent: Wednesday, July 10, 2013 12:11 PM
Subject: Time change?
Hiya Hot Stuff! My meeting was cancelled, so my calendar is open now.  If you want to meet earlier, me know.  If not, you will see my smiling face at 2 pm.
-S
============
From: The Body
To: Sassy
Sent: 12:16 pm
Subject: re: Time Change?
I will call shortly and head down
============
This meet almost didn’t happen.   He put my phone number into his phone wrong.  And then he wrote me email to tell me that and say he was on his way, and I never got it!  He showed it to me on his phone, but I never got it.   I did find the email later… in my spam filter!  Argh. Tech hates me!
B) Meet #1
I never heard from him, so I went out to meet him at 2 pm.  As I sat in Starbucks, I wondered if I should’ve waited for his call.  I sat there until 2:15 pm, then headed to the little grocery next door to pick up a late lunch.  He was coming out the door!  I didn’t catch it, but he did and called my name “Sassy?”  Why was he in the grocery?  Why didn’t he go into Starbucks?
I turned around and gave him a quick hug.  He had on jeans and a striped polo shirt, with very short gray hair.  His stats on AM looked about right in terms of age, height and weight.  He has a great smile and beautiful eyes.  He looked a bit like Harrison Ford in his short haircut days. 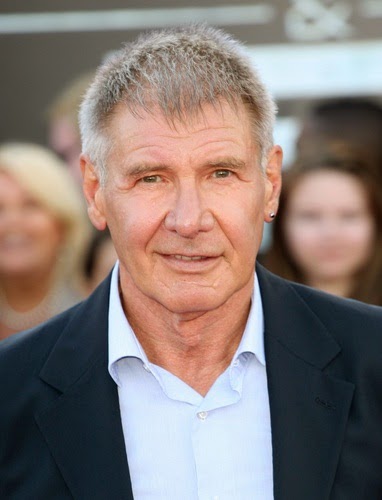 Harrison Ford
He pointed to his car parked on the street and suggested we go sit there and talk.  I had told him to park in the grocery lot – where it free, sheltered with trees and not many people pass by.  But he didn’t listen. Of course, people were streaming by on the street and driving past and it was a little nerve-wracking.
We started to talk and he reached for me.  He tweaked my nipple and said, “Wow!  They are huge!”  We kissed quickly then he broke it off and looked around.  He pressed me back into my seat and put his hand down my pants and poked around until he found my clit and proceeded to drive me crazy!  He was going too fast and rough, but I assumed he realized time was short and thought this was how to excite me in record time.  I buried my face in his neck, nibbled on his ear, made squeaky noises and then started a little dialog about what he was doing and what was going to happen if he didn’t stop.  I was just about ready to cum when he stopped.  A woman was locking up her bike to the parking meter right beside the car!  We laughed and sat back and took deep breaths.
She left and no one was around, so he unzipped his fly, took my hand and said touch me.  I pulled him out just a bit so I could see, then licked my hand and pumped him a bit.  There was pre-cum.  I told him I really wanted to put my mouth on him.  He said be quick, so I leaned over and sucked him twice then sat back up.  I tried to kiss him again but he didn’t want to.  Haven’t run into that before.
He said, “I really wish we could be naked.  Come over to my place later?  I’ll be there after about 6 pm.  Come over and we’d have a place where no one was around.” I didn’t answer right away and he said, “Well, I’ll be there…”
I told him he was very tempting… he smiled.  I said I’d like to see him.  We worked out that he would call me after his last meeting that he thought would be over about 6 pm.
He said he had to go, kissed me on the cheek and I got out of the car.
Elapsed time: 15 minutes
I went back to the office and found his email… in my spam filter!
So this was the 13th AM guy I’ve met. Will he call me?  Will I get to be alone with him?  Will I get to have sex?!   I hope that 13 turns out to be a lucky number!

One thought on “Meeting The Body”