I was astonished to hear from #1 again this morning!  He wrote an apology for being out of touch, and told me he REALLY LIKES ME and that was causing a crisis of conscience, because he had not actually cheated yet, despite meeting 7 women but he could not stop thinking about me, thinks I was the one who he could not resist.  So he needed time.
My online pals said not to respond.  GUILT KING!  Hard to tell if this was a gentle way of letting me down easy or some kind of truth.  I hear this excuse a lot – my friends on AM get it all the time, so I am skeptical.
I responded encouraging him not to cheat if he can avoid it.  Then offering to talk it out with him – I can be objective, or just flirt and not meet if that would be fun for him.  He may be a chaser not closer, so I told him to go do that if that’s what turns him on, and let me know how it goes because I want him to be happy even if it’s not with me.  It was very flattering to have the guy say I am special!  He is the one I think about most… his series of initial questions was brilliant. So worth some extra effort.
He wrote back with a photo!!  Hmmm… cute!  I told him he looks like a cross between Tom Hanks and Greg Kinnear!  Great smile, head of dark hair and very nice shoulders.  Yum!   He replied: “A cross between Kinear and Hanks? Now I want to date myself :-)” 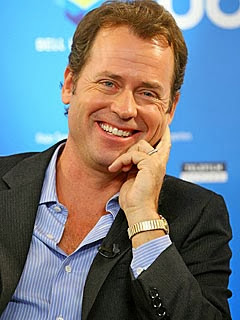 Greg Kinnear
He told me it was okay not to send a face photo back.  So I sent him my cleavage instead!  I asked him why he didn’t sleep with all those women he met, wondering if it would give me a clue into whether he was picky, unlucky or what.  He told me:
The woman I met that were nice all were looking for something slightly different.
I had a hot make-out session with one and we were really attracted to each other, but her husband was deployed and she wanted me to be available for her several times a week. I just don’t have that kind of availability.
Two were very nice, but the irresistible compulsion to take them in my arms and into bed wasn’t there.
And two seemed like they were in it for revenge against their husbands and that was a train wreck in the making I wanted no part of.
Two were kind of crazy. One claimed to be a non-smoker and was lighting up when I pulled into the parking lot where we met. That’s a deal breaker for me. And the other spent the entire time talking without any real need for me to participate in the conversation.
That all seemed reasonable.  It told me he was not the “Yuck but ah, just fuck em once for the hell of it” types.  And made me want him all the more.