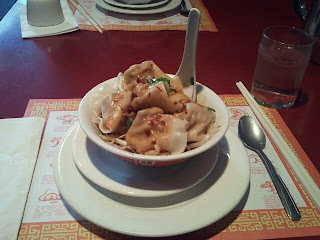 1:09 pm text Me: Home, full of dim sum.
1:58 pm text Me: Where now?
2:07 pm text Phil: Cleveland!
3:02 pm text Me: Doing ok?  How’s dad?
3 pm Phone call
[Summary: This was a more typical conversation – him telling one story after another.  Tried twice to get him to let me talk sexy to him… no go.  Ah, well. I was sitting at my desk, so I opened a file and typed in bits of our conversation as we talked.]
He ranted about hospitals and doctors, how they have scared everyone and made them come all that way when his dad was mostly okay, and they thought he had a DNR order when he didn’t, and how they mixed up his pills… yikes!
I told him about Mary Chung’s restaurant getting burgled.  We had to wait outside while the crime unit did their thing for half an hour.  Nothing was taken but an empty old broken cash register!
He told me about New Year’s Eve – drank a lot – and played board games.
He only got about 15 minutes of sleep yesterday, sitting in a chair at the hospital, though his family said he was still talking to them the entire time.  So he was awake from 6 am Thursday to 12:30 am Saturday (42 hours).  Got up at 5 am and hit the road.  Said he felt like crap until he got out of NY about 5 hrs later… but that he was bright eyed and bushy-tailed now.  I said that sounded good to me, tried to get him to talk sexy, but no go.
He told me about hijinks with his brother – they got into a snowball fight outside the hospital!  His mother thought they’d be over it by the time they turned 50, but he hasn’t changed, still happy to be able to do what he’s always done.
He said he’d been shoveling snow at the new place, making a run for the dogs. A neighbor came over with the snow blower, told him to use it whenever, yelled at him for stressing his heart.  He said the neighbors are nice.  They’ve been knocking on the door, bringing bottles of wine, very welcoming.
He’s set up his lawn furniture, ended up drinking a scotch outside with a neighbor, in 12 degree weather for 20 minutes!
Said he built a “man cave” in the basement with his TVs and bar.  I had never heard that term before, but it makes a lot of sense.  Getting direct TV.
One of the neighbors called Sally a “haughty bitch,” said they will cure her of that, get her involved in planning neighborhood events.  Said the other wives will explain to her how it is.  Phil said he looks forward to seeing that.  His wife is not going to get a job right now.  Most of the wives don’t work outside the home – home schooling children, gardening, volunteering, etc.  I said I hope she can be happy there, might make her nicer overall.  He said time will tell and sighed.
I told him my neighbors are gossiping about me, he asked why, I said because I’m sick.  He said that’s okay, shows their concern.
4:30 pm I asked if it was dark there.  He said no, reminded me that it’s an hour earlier out there.  He talked about the weather, how it was in the 50’s when he started but the weather now is 16 degrees!  He complained about various features on his car, and how he had to buy a different model than he wanted, but the “Amazon woman” (his wife) couldn’t sit in it because she is so tall from the waist to her head, she was hitting the roof.
He made a pit stop – I got to be in the men’s room again!  Something so freaky about that!
He talked about how much he likes the new place – they have a lot of conveniences and very safe, no one locks their doors.  He can store liquor out in the snow and it will be there when he comes back.  In bad weather, everything right there, don’t have to go far. He said he is thinks he will really enjoy it.
He said he was eager to get home to his dog, because he mopes while he’s gone, sits on the stairs near the door with his head and paws hanging over.  He said the other dogs don’t care, if “Mom” is there, they’re happy.  Also looking forward to a cold beer and some Scotch later on.
He described the gorgeous sunset he was seeing.
He said he’d better go, needed to call his kids and check on his dad.  I asked if his kids were coming to visit.  He said he was trying to get them out there, but they were crying poor.  He said he might send them plane tickets if he could find a cheap fare.
He thanked me for helping him pass the time, listening to his stupid stories.  Said he’d let me get back to the important stuff I was supposed to be doing.  I told him that talking to him is the best thing that I do.
5:21 pm he rang off
But I couldn’t manage to let him go.  I googled for answers to various questions he had during our chat.
6:50 pm text Me: Made it home yet?
6:57 pm text Phil: Not yet
6:59 pm text Me: found the name of that board game you played [name of game]
7:00 pm text Phil: That’s it
7:07 pm Me: Found flights under $160 if the kids are interested
7:08 pm text Me: yes I am bored and curious 🙂
7:08 pm text Me: expedia.com
7:19 pm text Phil: Cool!  Thanks
7:29 pm text Me: Safe to call me back?  One more thought…
I thought I was ready to tell him I love him.