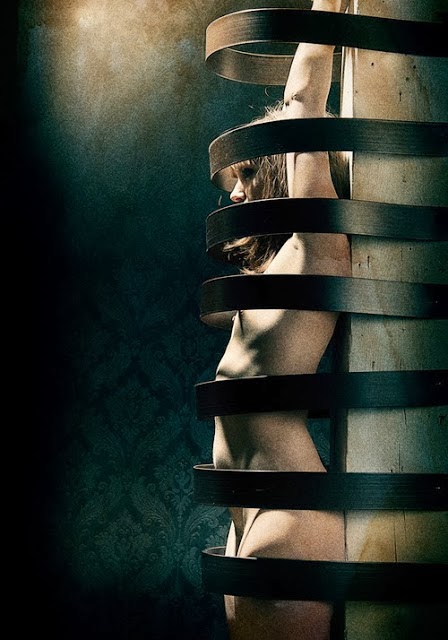 It’s Flash Fiction Friday time, when the talented Tom from Three Spelling Mistakes inspires us to write with a provocative photo!  Pop over to his blog to see what he and other wonderful writers made of this photo.  My take is below.
Here’s this week’s challenge:


Regaining consciousness slowly, she blinked her eyes, trying to assess her situation.  With a bright light shining in her eyes, it was tough to tell much, other than she was alone, naked and restrained.  She had trained for dozens of scenarios but nothing quite like this!  She flipped through her mental file of solutions and came up empty, so she went with the “wait” plan.
They’d been trying to get into the mansion for weeks.  The team tripped the security system eight times.  They managed to get in, only to encounter dogs, that were easily rendered unconscious with a harmless spray but behind that were men with tasers and guns.  That was an ugly night.  They finally called her in to use her special talents on a senior officer.  He bragged about his room in the main complex at a bar in her hearing, which made him her number one target.  It was easy to get him to take her home.  She remembered being in the kitchen, and then… nothing.
She closed her eyes and escaped to the past, choosing the day she graduated from the academy.  Finally free of most of the rules and regulations for a solid month, she decided to go out with the gang to dance and drink and eat a big steak.  She sat in the corner, filled her belly with the biggest sirloin on the menu, and watched the men pick up local girls who knew what the men needed after months in training.  She ended up alone with the nicest man in the group… he had big hands and a sweet mouth, and a fantastic body.  He took her to the classiest hotel in town and proved he knew what to do with them!  There was champagne and french fries and hours of the hottest sex she had ever had!  He could last and last… and knew this trick with his thumb… mmm… she trembled at the memory.
She heard raised, angry words she couldn’t make out.  Finally the senior officer stepped into the light with his gun drawn.  He placed it on the table.
“So sorry… things got a little out of hand there.  I came to get you as soon as I could,” he apologized as he unclasped the restraints.  “There was an incursion by some band of brigands.  It took me awhile to figure out where they put you.”  She put on her best poor little frightened girl look, happy to see her savior.
The moment she was free, she whirled, knocking him out with the side of her foot to his neck, grabbed the gun and looked around as he fell silently to the carpet.  Luckily, her clothes were folded neatly on the table as well.  Silly military men.  She dressed quickly – smiling as she realized they had not found her weapon or comm hidden in her bra.  She pressed the screen and typed “Well. Heading in” as she took off down the hall to complete her mission.