Monday, November 12, 2012
Speedy asked me to meet him at the Red Roof Inn, halfway between us, about 45 minutes from me. It was the perfect day to go – no traffic due to the holiday.  It was an easy place to find, just one turn off the interstate.
I got up early, and he called me.  He asked me to arrive earlier, said the room wasn’t going to be ready until 12:30 pm but we could sit in the car for awhile.  I showered, shaved, clipped my toenails, then put on my favorite work outfit – blue slacks, blue jersey top and lighter scarf.
I left home about 11 am.  He called me about 10 minutes after that and we talked most of the way down the highway.
11:50 am
I got there first and parked behind a little shed toward the back of the parking lot, which was mostly empty. I got out to enjoy the unusually warm sun.  I leaned against my car and looked around at the woods, the nearby highway and the hotel.
12:00 pm
He drove up and smiled great big at me.  I gave him a thumbs up and he got out of his car for a quick hug.  He is a little guy – he said he’s 5’9″ tall but he is a little shorter than I am, and I’m 5’8″.  He is trim and nice looking, had on a thin-striped blue & white dress shirt and jeans.  He reminds of Seinfeld, with lovely silver hair. 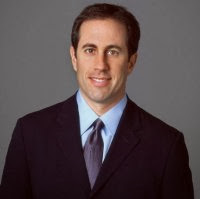 Jerry Seinfeld
He gave me a hug, then we leaned against my car.  We talked and I held his hand and stroked his wrist.  He said, “Let’s sit in your car.”

We jumped right into touching and kissing.  He didn’t want to kiss for very long, like 3 seconds. Odd.  He got me going with his hand between my legs. I was puzzled that he wanted to do so much in the car when we were heading inside, but maybe it was a test?  I was a little shy, but he pulled out his cock and I saw the pre-cum and I had to taste it.  It was an odd angle but I got him relatively deep.  He is long and big around.  It seemed like he expected me to just suck him all afternoon.  *sigh

12:40 pm
I finally kicked him out of the car to go try to check in early.  A big truck pulled in next to my car so I moved it closer to the door.
12:50 pm
He texted me the room # – 227.  I went in and took the elevator up.  The desk clerk was in the back watching TV and never even looked up.  I knocked on the door and he let me in.  We had a nice hug, then I looked around the room and pulled out my supplies – wipes, water, granola bars, lube. He drank some water but we didn’t end up using any of the rest of it.
He sat on the bed and took off all his clothes except his shirt.  I helped with that.  I want a man to undress me, but he just looked at me and waved like “get rid of all that,” so I took off my clothes.  I cuddled up to him and he sighed in that way that men do when they get that first naked hug.  I tried to kiss him, but he stopped me very quickly and told me he needed me to suck on him again.  So I did that for awhile more.  I felt rather disappointed that he was not doing anything for me.
We rolled around.  I asked him about the condoms we had discussed.  He tried to talk me out of it. I hate that.  He toyed with me in various positions a la missionary and then put me on my stomach and lied on top of me, revving me up but not going inside.  That felt amazing with his hard cock sliding around my ass and his weight on me.  I bucked back against him and he moaned well.  He did not go inside me… rimmed my ass, then lower… weird.  And then he wanted me to suck him more.  *sigh
I told him I needed his fingers.  He was rather rough but got me going.  He started hurting me, so I rolled over.  No oral. Grrr…. he stopped just as I was about to stop him and told me he was ready to come in my mouth.  I went down on him and fingered his ass, and he came relatively quickly.  I swallowed.  Tasted good.  He collapsed.  I stroked his face and played with his nipples.  I tried riding him, but he didn’t move much, just smiled, so I rolled off.  He played with my chest, gave me a nice mark on the right breast.  That made me hot.
He said he wanted to cum in my mouth again.  *sigh  So I helped him get hard again, using my fingers and mouth and swallowed another load.  He asked me my name.  I hate it when men do that, especially in bed.  I agonized over telling him but managed not to do it.
So he didn’t do much of what he had talked about, except the blow jobs.  I get… nothing?  No oral, no vaginal sex because I stood firm about condoms.  And he gets three blow jobs.  Another selfish man.  I am an idiot.
He made noises about needing to leave.  I asked if he could grab a condom and be inside me.  He said no, he had to go.  I kissed him and hugged him and he got up to clean up and dress.  I sprawled on the bed on my stomach, enjoying lying there, displaying my assets as he moved around, free to be naked as I am not at home.  He asked if I was going to stay over, and I said no, just resting and staying out of his way.
3:50 pm
He gave me a quick hug and left.

I went to the bathroom to clean up and catch up on emails on my phone.  I ate a granola bar.  I marveled at how I managed this entire thing without him seeing me hobbling. I walked in alone, did a sultry slink along the furniture, then stayed on the bed!  Heh.  Here’s to not having to explain about plantar fasciitis!

4:20 pm
I dressed and took off.  I missed a call from the Professor, so I called him back and talked for the 10 minutes he had left.  He can’t meet tomorrow.  He has a special meeting at work that sounds legit.  So he postponed for two weeks.  But asked if he could call me again tomorrow.  All good!

The traffic was very light, and I was home by 5 pm!

So… this meet wasn’t what I wanted it to be, but it had its moments.  I texted him when I got home, thanking him.  And he replied.  “Nice being with you.”
I am not overwhelmed, but I try not to judge from the first time.  I’ll probably go again if he asks… see if he gets better?  Whee!