Monday, August 10, 2014
[from my private journal]
11:12 am – A summer afternoon in Newburyport and Plum Island
Hubby and I had a lovely afternoon on Monday adventuring to the north.  The weather was perfect – another of the series of beautiful days we’ve had this summer!  My work is about to get super-busy so I wanted to get out and about before that hits.  And Mondays are a great day to avoid the crush in the tourist/beach towns.
We set out up Rte 1 and stopped to gas up the car at the cheap Hess Station, then popped in at our favorite convenience store – a random Cumberland Farms in Ipswich that has clean bathrooms and stocks interesting new products.  Hubby picked up 3 of 4 new flavors of Lays potato chips:
• Wasabi Ginger,
• Mango Salsa and
• Bacon Mac & Cheese.
• He eschewed the Cappuccino flavor, not caring for that flavor in real life and rather horrified at the entire idea!
I picked up the Muddy Buddy Chex Mix.  We shared a “Wild cherry Italian ice” which was actually mild flavored but still tasty.
We went to Michael’s Harborside Restaurant on the harbor in Newburyport.  It’s easy to find – just a quick right and left off Rte. 1, with a huge parking lot, right next to the marina.  It’s a gorgeous setting – an outdoor bar, a covered deck, an open deck and an interior restaurant with big windows.  We opted to sit inside and were placed right at the front with views of the boats.  Our server, J.R., was helpful, if a bit busy and inattentive, but we weren’t in a hurry.  I had the most delicious creamy clam chowder!  It was full of fresh clams and potatoes.  Yum.  They served hot sourdough rolls and whipped butter – a real treat!  Hubby tried their soup du jour – a very ordinary vegetable soup with thin broth and lots of summer veggies.  I saved him from having to eat a big chunk of zucchini!  From there, things went downhill.  He ordered the tuna with ponzu sauce and found it inedible in that “smells” way.  Bleh.  He mentioned to the server, who took it away and brought him a menu to try something else.  His second choice was wonderful – the swordfish with garlic citrus butter.  I had the lobster pie, which was an odd recipe with mascarpone cheese that overrode the lobster flavor.  I tried to pull out the nice chunks and rid them of the gloppy sauce, but it was mostly bad.  Both our dishes came with grilled asparagus, which was fresh and perfectly cooked.  They also came with rice pilaf which was an odd mixture of overcooked and undercooked grains and inedible.  And the prices were 1/3rd higher than similar places.  So despite the lovely setting and perfect chowder, I can’t see going back.

We took a post-prandial stroll along the harbor.  They’ve created a lovely walk with sculpture and benches and plantings!

I had an hankering for ice cream, so we drove back down Rte 1 to the traffic circle and stopped at Haley’s Ice Cream. a fun retro shop with a 50’s interior and picnic tables outside.  I got a sugar cone stuffed with raspberry truffle ice cream!  It was a spectacular combo of raspberry ice cream with little chocolates mixed in.  Hubby tried the ginger ice cream which had crunchy bits of real ginger.  We sat outside in the afternoon sunshine and made a big mess with ice cream dripping down our hands.  Thank goodness for the lovely bathroom inside to wash up!

We rolled on to the beach at Plum Island. I drove around the cute little enclave of houses and drove down to the light house on the far end.

I thought we’d park after 5 pm – only $2.50 at one place – but Hubby wasn’t feeling well, so I left him parked in the residents only section and walked on the beach myself for a few minutes.  I had fun sitting on a rock, taking photos and a short video. 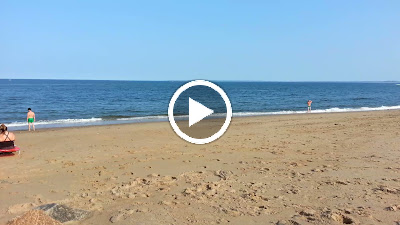 We took off for home and it was only an hour!  Traffic was the lightest I’ve seen.
Such a lovely excursion… stored up a bunch of memories to carry me through the busy fall!
Hope you are enjoying the end of your summer!