Kris invited me to go with him to Cape Cod and Martha’s Vineyard!  I haven’t been away for more than one night in years. This is so exciting!

The plan was to find a hotel near Providence (much cheaper than on Cape) and go down Saturday night so we could get up on Sunday and drive out to Orleans to go boating, the drive back late. Monday would be our Martha’s Vineyard day, driving home late at night. 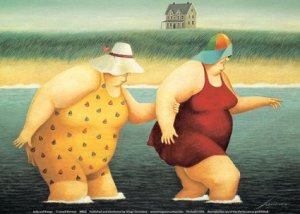 Also, go to Herrero’s site to see the awesome other “sensual” work he’s done–mostly of nature and big people (bigger than you or Hubby) farming the land (he’s from CA) or just living every day life.

You need to be willing to get wet (no, not that kind–besides that!)—-at least up to your waist in the ocean someplace. So bring something you could go in the water in. I don’t care what you look like in whatever you wear. I want you to “experience new things” with me—DIFFERENT—-we can play in the water together!!!!! I’ll even let you grab my cock and grope me if you go into the water with me.

P.S.–Working toward being “fashionable not too late”….. Mwah!

Kris called at 4 pm Saturday to tell to me he was on his way down from NH! I had been hoping to see him since 2 pm… but knew he had a lot to do to prep to be away. He showed up about 5:15 pm. I was antsy, so I went downstairs and talked with a neighbor and her dog outside. He rolled up in front of the house with the little white truck and the boat. He stowed my stuff and we took off South down Rte 93 to I-95. I wore my new navy blue polo shirt and shorts. Very summery!

We decided to have dinner at Olive Garden at Patriot Place in Foxboro.  It’s at the far end of the parking lot for the stadium where the Patriots play football.  I’d never seen the stadium and the stores around it. It is HUGE!

He is so good to indulge my cravings! It wasn’t crowded at all!  I had the sausage soup and a little salad, a couple of breadsticks, then the spaghetti with meat sauce and sausages. He tried their salad and the eggplant parmesan with spaghetti. He finished up with a cup of coffee. He told me the latest on his wife, and his meeting with their pastor. She is texting him invective all day long. The pastor was very friendly and helpful, wanted lots of details about his new motorcycle in an envious way! The pastor offered ideas on how he could reconcile with his wife in time, and held out great hopes for their meeting with her.

We motored on to the Red Roof Inn in Mansfield, an inexpensive place to stay where we can drive to Cape Cod in the morning. We unpacked and piled into the bed to play with toys! I couldn’t do anything with my mouth due to an impending cold sore, so Kris was creative with the silver bullet, making me cum hard while he pressed it against my clit and rolled it back and forth. He even talked more! Then he pressed the toy up inside me!  He followed it with his cock so we both got the benefit of the vibration while he was inside me using his favorite under/beside me up from underneath sex. He held me tight and came hard. I dozed off satisfied and happy about 1 am.