The night was perfect, not to warm after a hot day. The air coming off the front of the motorcycle was just enough to cool, without making one cold. The headlights make their marks on the road ahead, a preview to what lay ahead, but not what he was looking forward to. What he wanted had her arms wrapped around him, holding on tight against the wind. He could feel her hands on his body as they rode along that dark ribbon in the night. Thankfully, his destination was not to much further away. Not knowing if it was her mind, or the vibrations from the bike getting to her, her hands kept traveling between his legs, grabbing through his jeans, “not much further and your mine” he muttered into his helmet. 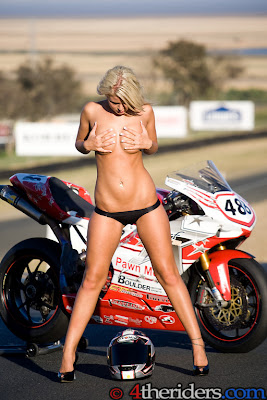 Her teasing continued for what seemed like an agonizing eternity before he got to the secluded spot he was looking for. He shut the engine down and they removed their helmets, the absolute quiet took them both by surprise. He told her to stay in her seat as he got off and turned around to face her. He pulled her by the back of her neck, his lips meeting hers, his tongue searching, probing, as his fingers laced in her hair. They both pull at each others clothing, zippers drawn down and jackets pealed off. Her shirt is over her head in an instant as he kisses his way down her neck, down the middle of her chest. Her bra is discarded as quickly as the rest, his mouth finding a nipple and sucking, hard. His hand on the other, pinching and tugging at the nipple. She throws her head back, loving the pressure, above her, nothing but the bright moon and stars.
He tells her to get off the bike and helps her down, he needs more flesh to feast on. She’s on her feet with her back to him, his mouth on her neck as he unbuttons her jeans and slides them down her legs. He tells her to bend over the bike, his hands instantly on her ass, a hand running up between her thighs to find just how wet she is, she doesn’t disappoint. He slides his hand back and fourth over he swollen lips, her clit as hard as he is. He pushes his thumb into her, his palm and fingers continuing to rub her clit as he moves in and out. Her moans are the only thing breaking the silence of their surroundings. He gets down on his knees, his hand pulling at her ass cheek as he lightly licks at her ass. Her body bucks forward on the bike quickly, not expecting the added touch. It doesn’t take long before she’s pushing her ass back at him, driving his fingers and tongue deeper with every push. Her legs quiver with the approaching wave, he feels it building in her pussy, “yes baby, cum for me” he says. She cry’s out with pleasure, forcing herself back at him as she cums. He wants her so badly, wants to just fuck her ass right now, but no, not yet.
He needs to feel that mouth on his cock. Needs to know if it feels as good as it looks, as good as he imagined. He moves around to the other side of the bike, she is still bent over it, her head low enough to take him. He unbuttons his jeans with one hand while the other takes her hair to one side of her head. She know’s what he wants and she’s wanted that cock in her mouth just as much. He takes his pants off, and moves right in front of her as she pops the tip into her waiting mouth, licking and sucking on just the head. His hand winds in her hair as he moves deeper into her, and she takes him effortlessly. She wants it all and knows he’s not there yet, she reaches with her hands and grabs his ass, pulling him down her throat. She hears him gasp as he feels himself consumed. He pulls with more force now on her hair, fucking her mouth rapaciously. “Fuck, you feel so good baby” he whispers to the night air. “No, not like this” as he pulls himself free of her mouth. “I want your ass”. She only answers with a smile and “mmmm” as he moves around behind her. 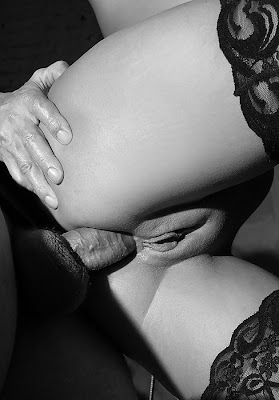