So…. maybe you’re wondering what happened next, after Mr Hyatt and I had a lovely afternoon at the hotel?  Did he keep writing?  Did I see him again?

The man did almost everything right – beautiful hotel room, wild romp, said nice things about my body, asked to see me again before I left the room, texted me right away and I felt… nothing.  I don’t care.  I don’t want to see him again.  I know, this is the sort of thing that is super-depressing for men to hear.  But he was a perfect example of “NO CHEMISTRY!” Ugh.

I sat in my car in the hotel garage that day and felt…. nothing.  I hoped the memories would get better over time, but… they got worse.

I told myself not to judge based on a first meet, then analyzed it from every angle, told myself I should not close the door, that there would be days when I would change my mind and need some man’s hands on me and it could easily be him.  How could I turn away someone who was doing the right things?   I won’t bore you with the long list I made of reasons not to carry on but the bottom line was… I didn’t want to!  Imagine that… me not doing something a man wants! 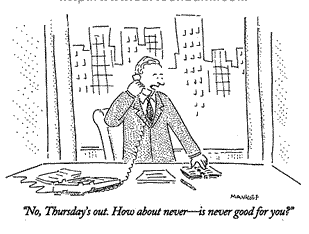 Cartoon from The New Yorker magazine

Of course, he wrote while he was away.  A lot. Even called me.  But I still felt… nothing.  I tried to be nice, sent him classy p0rn videos most men have liked and videos I like.  He told of pining for me, sent me the oddest videos of huge sexy women (bigger than me!) being adored in various odd ways by thin ugly men – so strange I can’t even post them.

Then when he got home, he didn’t get in touch for three weeks and that was only to say that he was leaving again for six weeks!  Why does he only write when he’s thousands of miles away?  I know, I know… busy, busy… but… don’t say “I can’t wait to get home and hold you in my arms” and then… not write when you get home.  But I was relieved.

Things happened in my life and I didn’t have much time for awhile and realized I didn’t want to make time for him ever.   I explained about my new challenges, told him I was not interested anymore but he never seemed to get it.  He’d email with the subject line “Let’s get it on.”  That’s it… no message.  Nope.  Don’t want to.   I kept answering for awhile, being polite.  I don’t want him ticked at me.  A man can do bad things when he’s ticked.

Then I stopped writing.  That’s really not like me, but I couldn’t think of any other way to say, “no thanks.”   He kept writing.  He is still writing.  Every now and then.  Latest was, “Still got hots for you.  You got anything for me?”  Sigh.

Figures… I hate silence and the guy who keeps writing is someone I don’t want to hear from!