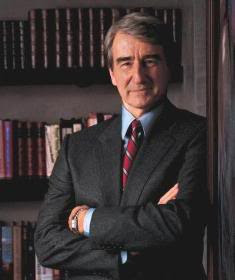 It was wonderful!  I got the restaurant before him, sat in the entry watching men going by… he told me what he’d be wearing – I counted 16 men with that on before he appeared!  He finally showed up about 15 minutes late, just as I was about to give up.
I gave him a hug as he entered and he squeezed me for 2 seconds and breathed mmmm… into my ear.  He led me to a table and we sat not facing each other, but on two sides of the table.  He apologized profusely for being late.  He explained that he’d walked right past the restaurant (it’s on an upper level) and gone quite a ways before he figured out he missed it and had to double back.
He is a charming, urbane, classy gentleman.  He wore the classic business casual lawyer outfit – blue blazer, blue & white striped shirt, and khaki pants.  He reminds me of Sam Waterston, the D.A. from “Law & Order.”  I had on black pants, black unconstructed silk blazer, purple/pink squares silky blouse, a pink and silver necklace nipple length, tiger underwear and my lucky black bra!
He made lunch very easy and comfortable.  He told me to order whatever I wanted – that he was paying.  Wow!  He had the sole and I ate broiled scrod and steamed carrots.  We talked and talked… he seems like someone I know already, in the best possible way.  He knows a lot of people I used to work with.  He was interested in my project work.
After about an hour he said that he likes me a lot and he’d like to see me again.  That it can be anything I want… he is not demanding, doesn’t require exclusivity, just wants to be with me, however I want that to work. Then he winked and said, “But you should know that I’d like to get my hands on you.”  Wow!  Someone wants me! What a feeling!  You know that affect where you feel sexier because someone else thinks so?  Yeah… that.  He stroked my wrist with his thumb and I thought I’d faint… so simple and sexy.  He asked me to think about it and email him.
As we left the restaurant, he took my hand and asked if there was anything else I wanted to know.  I said yes, but… I needed somewhere more private to find out.  He nodded (understanding that I wanted to know how he kisses!) and led me down an alley by the big brick church.  We grabbed each other – kissing, groping.  He put his fingers in my hair to hold my head and plundered my mouth, my neck, my ear… Yowza!  There was magic in the autumn afternoon sun!  Yum.  He squeezed my left breast.  I was very bad and put my hand in his front pocket to see if I was causing a reaction.  YES!  😉
I waited about two hours… could not figure out what to write.  I ended up with “MORE!  SOON!”  heh.  He liked that.  But then I haven’t heard from him today.  Note to all gentlemen – if a woman kisses you, make sure you wish her a good morning the next day!
So… I met The Lawyer!
I am off to drinks with Dancing Man this afternoon.  This is going to be completely different.  He is so blunt.  He does strike me as a player.  But you know what?  I want to play!
The Professor wrote back last night after two days away.  He is a much slower worker, but that’s okay.
AM #1 (who had disappeared and then reappeared) wrote back all excited to meet, but then hasn’t written with details.  Ah, well.  I am very calm about it.
I told Philip I met a guy and am meeting another today.  He said, “Wow! You go girl!”  I am left to wonder why there are two men I love (Hubby and Philip), neither of whom care if I fool around.  I should feel lucky I can do what I want but… *sigh

2 thoughts on “The Front Pocket”