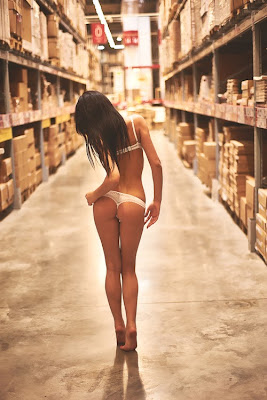 Here’s this week’s Flash Fiction Friday prompt from Advizor54’s blog.  Click over there to see what he and other bloggers wrote about this photo.  My thoughts are below:

Key words: (Must use both) – Abandoned and sprint
Word Limit = 250 per section
Forbidden words  – Any store name, “thong”, boxes
Bonus Words (25 per secton) – keep everyone alive
Extra Credit – Tell us about the sexiest NEW person you’ve met/interacted with this week (current spouses and lovers et all, not allowed)

“I swear this will be the key to increased sales!  All the focus groups adored the idea,” insisted the guy from the ad agency.  “We can build a runway, with your supplies…” he droned on.
My boss was lapping it up… this guy wanted to bring nearly naked models to the store in the middle of night to film a commercial.
We were struggling compared to the big box stores and searching for a new angle.  I was pretty sure this was not it… my analysis of the data showed that women drive the store choice – give their husbands a list and sent them to the store.  Sales work best.  I had gone over the various proposals and told the ad guy the scantily clad women idea should be abandoned right away, but he insisted on pitching it to the boss.  Of course, the boss liked it.  Ugh.
“And then we can take them all out for breakfast!” he ended with a flourish.  Just shoot me, I thought, as the boss nodded and drooled at the photo on the screen. The ad guy is rather cute… maybe I could sit next him, bat my eyelashes and brush my hand up his… wait!  This whole “sex sells “angle is addling my brain!  The last thing I need is playing footsie with some marketing hack.
I had to sprint to the women’s room before I tossed my lunch.  By the time I got back, the boss was excited about the idea of cats and dogs doing tricks around the checkout lanes!   Hooray!  I like poodles and tabbies more than lingerie models.   And the handler is gorgeous!