Wednesday, September 14
I had set my alarm for 6:30 am.  I woke up from a weird dream where I got a new job that was completely beneath me, and when I went back to my office they had hired someone without a high school education to do my job, and I had forgotten to take all my personal stuff home.  Weird.
I asked Philip about his plans for the day.  He told me his schedule, said this is fun stuff with good people.  He told me several stories about the changes in his office and how things are getting better, but it’s very draining.

He said he’d be back a little after 5 pm to change clothes, then heading out for supper with his co-workers.  He hoped to be back by 9 pm.  I asked if it was okay for me to stay, that I didn’t want to wear out my welcome.  He said he would love to have me stay, that I was a very easy room mate.  He gave me a long kiss and squeezed my ass as he left.
I worked on my computer, catching up on work emails. I sent him a football joke via FB (“get the quarter back!”) at 9 am.
At 10am, I looked at menu for his evening meal, and found the lobster pasta dish he said he’d been looking for and sent him another FB message with the info.


10:03am
Looked at the menu – very fancy and pricy.  They have a lobster pasta > Lobster Pappardelle: Steamed lobster, fresh pasta, oyster mushrooms, spring peas, apple wood bacon, lemon-garlic-herb butter    $30
A pal pinged me to check on where I was, again astonished that I was staying yet another night. Sis called and we had a nice chat about the fun I was having and her day.

12:23pm
heading to Bristol.  Hope you’re having a great day!
I made myself go out for a drive.  I ended up in Bristol. It was stunning!! The Mount Hope high bridge into town lets you see for about 50 miles in every direction!   Islands, bays, boats, homes…gorgeous!  And then the town is so cute, all these little shops along a harbor walk.  I went to this incredible restaurant on the harbor called Quito’s… I am stunned that I had the gumption to eat alone but I did it!  And it was delicious – cheap, fast and great!  I ate a stuffed clam, clam chowder and then lobster scampi and bread.  Yum.  Philip and I texted while I sat admiring the harbor.
The weather and view was so spectacular!  All the diners were smiling at each other and saying things like “Could this day be any more perfect?!”  Heh.  I texted Philip, sent him a couple of photos.  He told me I suck.  🙂   I walked up the harbor walk and peeked into several shops and a hotel.  So New England!  I bought myself a scarf.  Everything is 20% off as the season is ending.   The owner gave me directions to a private beach in Little Compton, on the down the road from Evelyn’s. I got to see the America 3 America’s Cup boat!  I stopped at a scenic overlook and marveled at the lovely green countryside sloping down to the water.
2:51pm
Heading back now.  See you soon.

It’s the kind of day I wish I had everyone I know along on!

I took a bunch of photos I think you can see here:
https://plus.google.com/u/0/photos/101174762249697322833/albums/5777727488448142753
Sorry to go on and on… but this is probably my joy for the year, and maybe one of the best days of my life.  I can’t believe I was brave enough to come down here, and stay down here and go out alone and see all this… it’s the post-cancer “LIVE IT UP!” me.  Hee.
I got back to the hotel about 3:30 pm, emailed photos to people and popped them into G+.  I answered more work emails.
Philip came in at 5 pm for about 20 minutes, oohed and aahed over the photos of my day.  He seemed really pleased that I had ventured out alone and found such special places to show him next time.  He went off to dinner with the guys.  I surfed the web then made myself go out again.
I found an incredible little seafood deli for take-out, Anthony’s, ended up with clam cakes, clam chowder and a stuffed clam!  All for $8.95!  I took it back to the room. 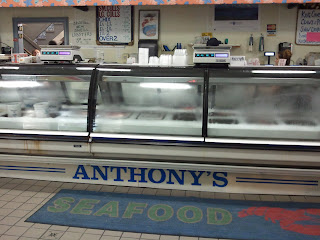 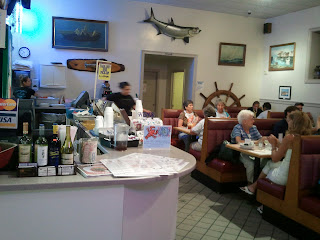 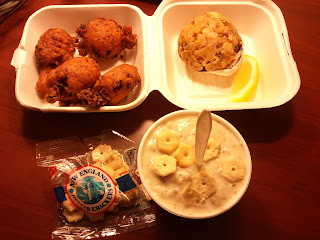 He wanted to swim and sit in the hot tub and asked me to go with him, but warned me that half his conference mates are staying here, so to be careful.  There were a couple of people in the pool, neither of which he knew. He swam out into the night air and I went out the door to look at the sky.  I sat in a chair and chatted with him about his dinner and my dinner.  We could have been strangers.
We came back to the room and chatted some more.  He turned on the TV to an odd comedy.  I snuggled up next to him and rubbed on him a bit, but he fell asleep.  I’m disappointed… I want to be as irresistible to him as he is to me.
His wife called… his phone was on silent and I noticed it flashing, so I woke him to tell him.  He dashed out of the room to call her.  He thanked me when he returned, then apologized for falling asleep, said he was exhausted from the conference and having to deal with work as well.  We talked some more, and he fell asleep again.  I don’t know what I’ll do tomorrow… we’ll see.
So I pinged Hubby online and chatted with him a bit.  He had gone out to dinner with a friend! Yay.  He said he misses me!
Philip woke up for a bit and explained that he had to be away all day tomorrow and has a big dinner with the group tomorrow night, and may not be back until very late.  He didn’t ask me to go but it seemed like he could not promise me any time.  I would stay but I get the feeling he needs one night alone before he goes home on Friday.  I probably should just go home in the morning but I don’t want to yet, more about not going home than staying here.  But we’ll see… need to get more info out of him in the morning.
He seems afraid to just say what he wants done.  Probably years of getting flack from his wife.  Such a bizarre way we interact but he seems to appreciate me staying in the moment.

I got onto my computer and began to write about our time together.  It is so comfortable being with him, listening to him, talking to him, sharing a meal… and of course, having someone to touch me and let me touch him!